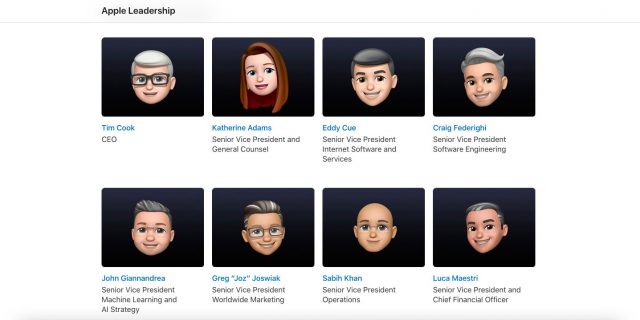 Apple has updated its leadership page, which outlines the company’s execs and division heads, and has replaced each image with their respective Memoji. The timing of this lines up with Apple’s WWDC happening later today, where the company will be showcasing new software innovations as well as iOS 15.

As reported by MacRumors, Apple has done something similar in the past. In 2018, Apple celebrated World Emoji Day by replacing each executive team member with their Memoji heads. That said, the decision to update the leadership page is unlikely due to World Emoji Day as it falls on July 17th. Instead, it was likely done ahead of Apple’s WWDC which will take place Monday, June 7th.

The virtual event will kick off at 1 PM ET/ 10 AM PT. The keynote is expected to give us the first look at iOS 15 as well as the updated 16-inch MacBook Pro. iMessage is also said to be a focus this year as Apple is looking to iterate and improve the messaging app. Beyond that, details are scarce.

WWDC will continue throughout the week and wrap up on June 11th.