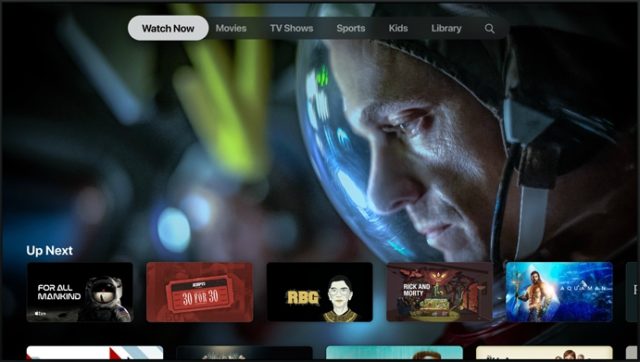 Apple is looking to implement supplemental augmented reality content to Apple TV+. It is said that Apple is investing in this prospect not only to drive subscriber numbers but to increase interest in AR technology.

The new features, which have been reported by Bloomberg, will apparently display objects and characters on the tablet or phone of the viewer as they watch content on Apple TV+. These will be displayed and integrated into the surrounding environment. Bloomberg provides the following example based on its sources:

“For example, someone watching a moon-walking scene in the Apple show “For All Mankind” might be able to see a virtual lunar rover on their device’s display, seemingly perched atop their living room coffee table. The option would serve as bonus content akin to the director commentary or trailer that accompany a movie download and would be accessed from Apple’s TV app on the ‌iPhone‌ or ‌iPad‌.”

The AR component of Apple TV+ is expected to debut sometime in 2021. Sources have said that Apple planned to release it this year, but was delayed due to COVID-19 impacting software development and content production, it has been pushed. Bloomberg’s Gurman also said that Apple could end up scrapping the plan entirely, though development on an Apple AR/VR headset is still planned for 2022, said sources. AR is still a pillar of Apple’s technical focuses. The iPhone 12 Pro Max is said to have a LiDAR scanner, similar to the iPad Pro. This will give AR apps a “better sense of the environment” and load faster. Beyond the 2022 AR/VR headset, an AR-only pair of glasses is reported to be planned for 2023.

Apple’s AR initiative for Apple TV+ is one of the ways the company plans to release bonus content to bring in more subscribers. Supplemental podcasts coinciding with existing TV shows are planned. Apple is also reported to be planning to release subscription bundles, pairing Apple TV+ with Apple Music.