Apple Stock Down 11% Despite Highest Sales Numbers Ever

After reporting an impressive holiday quarter earnings, Apple’s stock price fell by more than 11% to $450.66, as investors were eager to hear an old-school Apple beat – which didn’t come. Well, sort of… 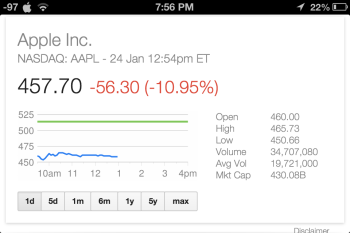 Instead, we’ve heard Apple reporting a 28% rise in iPhone sales – investors hoped to hear 50 million units – and 48% increase in iPad sales. This causes concern among investors, as they cry out loud for ‘disappointing’ 47.8 million iPhones sold in a single quarter.

“People are concerned about how quickly sales are falling off after the initial product launches and whether the company can deliver new and interesting products to reignite growth.”

Also, analysts seem have concerns about Apple’s profit growth in the light of its competitors’ growth. The Cupertino company recorded the weakest increase in 14 quarters, Bloomberg reports, while Samsung reported a stunning 89% increase in profits for the holiday quarter. From this perspective, Apple’s profit could be disappointing.

So the euphoria that pushed Apple’s stock price to its record $702.10 last September has vanished, at least for now. And this is reflected in revised price targets on Apple’s stock today, as 18 brokerages have lowered their price target – even Topeka Capital’s Brian White who set the price target to $888, down from his earlier $1,111.

“We believe a capitulation process is underway — and while painful — it is healthy since the loftiest expectations should be reined in quite a bit,” Barclays analyst Ben Reitzes wrote in a research note today cited by AllThingsD. “This spring, Apple should be readying a bevy of new products and services — and when the builds for these products become known — shares may act a lot better. We have seen sentiment turn quickly before with other leaders like Facebook (in 2012) and Google (in 2011).”

But for some investors, this drop is a good buying opportunity. As David Rolfe, chief investment officer at Wedgewood Partners, points out: “This is not by any stretch of the imagination a broken company.”

While he couldn’t reveal Apple’s product map for this year, Tim Cook is confident in what Apple prepares to present to the public and what they already have in the store:

“We’re working on some incredible stuff,” he said. “We feel great about what we’ve got in store.”