Apple has been granted a series of patents by the U.S. Patent and Trademark Office. Of the 77 that have been recently published, two patents, in particular, stand out. One covers a possible iPhone or iPad which features a backside touch-screen display. The other is a new MacBook Touch Bar configuration.

The recent patents won by Apple were first reported on by PatentlyApple. The report covered a patent that illustrated a future iPad with a secondary display used for “stimulus features”.  Based on the descriptors, the backside display can be used to show text, images, videos, and photographs. The patent states that the display can be used as a multi-touch or multi-force sensing touchscreen. 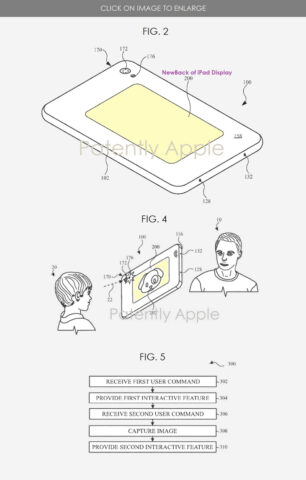 The stimulus features that could be shown on the backside of an iDevice are designed to attract the attention and gaze of the subject prior to and during capture of the image.

As depicted in the illustration, the stimulus feature shows an image of a dog to attract the child to look at the device for a photo. The stimulus feature can be used to elicit any response from the subject whether it be a smile, a laugh, or a surprise. The backside display paired with the device’s speakers can be used in tandem to offer a video message, animal sounds, music, etc. as well.

The second notable Apple patent is a new configuration for the MacBook’s Touch Bar. 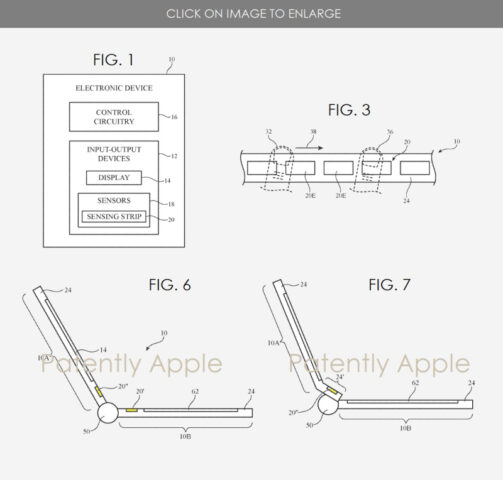 In one instance, we see a Touch Bar located above the keyboard, just as it is now. However, a second Touch Bar appears to be located right underneath the display (Fig. 6). The other example illustrates a Touch Bar implemented at the bottom of a curved display ledge.

Recently, it’s been rumoured that Apple may drop the Touch Bar entirely moving forward. Although the new series of patents does include innovations on the MacBook Touch Bar, it does not point to whether or not Apple may keep it in the future. As with the backside display, Apple patents many of its projects. There is no guarantee either will see the light of day. Though, it’s something to keep in the back of your mind.