Apple’s first calendar quarter iPhone sales may fall short of analysts’ and investors’ expectations, as one of its audio chip suppliers — that mostly depends on Apple — Cirrus Logic, has missed its first quarter sales forecast and reported an inventory glut, reports Bloomberg. 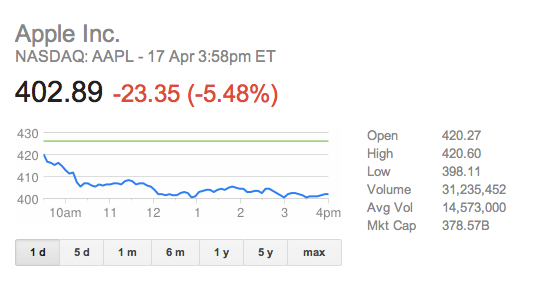 Some analysts, such as Vernon Essi Jr. of Needham & Co., claim Apple has lost its mobility mojo, while others predict an 18% drop in net income for the first calendar quarter of 2013.

What alarmed investors is that Apple accounts for roughly 90% of Cirrus Logic’s revenue, according to Bloomberg, and that Cirrus will record a net inventory reserve of $23.3 million, for the past quarter. The majority of that, $20.7 million, is from a high-volume product from one customer.

Peter Misek of Jefferies and Co. says Cirrus’ quarterly report is an indicator of demand for Apple’s top-selling products. From this perspective, it doesn’t look good for Apple.