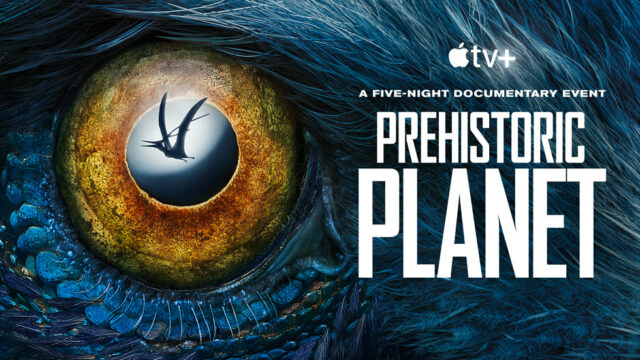 The first episode of the Apple TV+ docuseries Prehistoric Planet is available to stream on Apple TV+.

Starting today, Apple is rolling out its dinosaur-focused documentary series on Apple TV+. Prehistoric Planet is billed as a five-night documentary event and will see a new episode released each day this week.

Prehistoric Planet features a high budget to recreate many of the dinosaurs featured in the docuseries. It focuses on the science behind each species, showing how they lived and the diverse ecosystems to brought dinosaurs together. Each episode showcases a different biome. These range from desserts, to underwater, and grassier forests. A large assortment of dinosaurs has been recreated using state-of-the-art CGI including T-rex, Triceratops, and Pachyrhinosaurus.

The first episode, titled ‘Coasts,’ features a pregnant Tuarangisaurus travelling underwater, avoiding some of the more deadly predators in the oceans. Each episode shows how these species live, hunt for food, and coexist. Using photorealistic visual effects of MPC (which was used for The Lion King and The Jungle Book), these stories are brought to life.

Prehistoric Planet explores how these animals live, from hunting to food to finding a mate. There’s far less emphasis on fighting when compared to the depiction of dinosaurs in typical Hollywood content. These stories are brought to life using stunning visual effects and cinematography of the natural world.

The docuseries is developed by executive producers Jon Favreau and Mike Gunton. BBC Studios Natural History Unit, the team behind Planet Earth also has their hand in developing the series. Academy Award-winning composer Hans Zimmer lends his talents to create an original score for the series. Plus, Sir David Attenborough is the narrator throughout each episode.