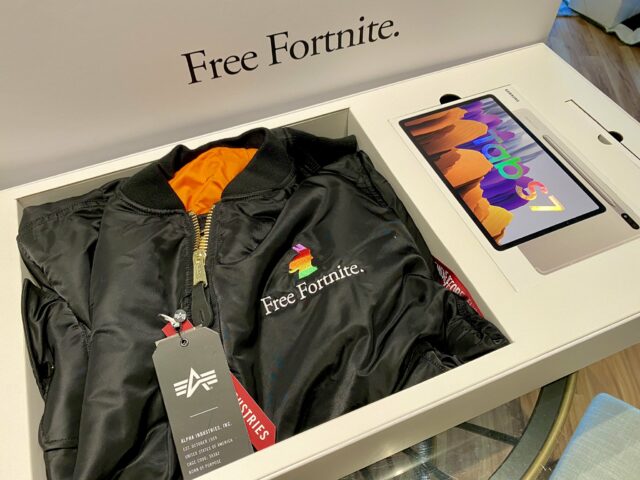 Epic Games has teamed up with Samsung and created an influencer package as Epic’s ‘Free Fortnite’ campaign against Apple and Google continues.

The dispute between Fortnite developer and publisher Epic Games, Apple, and Google has been boiling over this year. Earlier this year, Fortnite was removed from the App Store and Google Play Store following Epic’s bid to create a direct in-game payment system that would, in turn, be a workaround for Apple and Google’s 30% commission. Apple and Google fired back, removing Fortnite from their respective marketplace. Thus, Fortnite created the ‘Free Fortnite’ campaign, including an in-game event.

Now, the ‘Free Fortnite’ campaign continues as Epic Games has partnered with Samsung to deliver branded merch and Samsung’s Galaxy Tab S7 to influencers and content creators. Kinda Funny’s Greg Miller was one of the few to receive the package. On Twitter, Miller posted pictures that showed an obvious dig at Apple’s product packaging. Inside, the influencer package contained Samsung’s tablet along with a ‘Free Fortnite’ bomber jacket. Epic Games included the llama logo, mimicking Apple’s logo on the front and back of the jacket as well.

A note from Epic Games was included in the package, that reads as follows:

Fornite was named the Samsung Galaxy Store Game of the Year for 2020. In celebration, we’ve teamed up with Samsung to send you a special box of #FreeFortnite gear. While Fortnite may not currently be available on the App Store or Google Play, you can still get the latest Fortnite updates directly from the Epic Games app on the Galaxy Store. Spread the word, #FreeFortnite.

Thank you,
The Epic Games team.”

The dispute between Epic Games, Apple, and Google has not only boiled over online. It has spun an ongoing legal battle. Epic Games has taken Apple to court over antitrust issues. The case is still in a preliminary state. Recently, a judge has ordered that Apple will be unable to limit CEO Tim Cook’s testimony when the hearing begins on May 3rd, 2021.