Here Are Potential Candidates for Apple’s Next Head of Retail

Being Tim Cook’s first hire resulted in John Browett being his first fire, after only nine months of damage to Apple consumer satisfaction. Now Apple is once again in the market for an executive who will oversee its retail stores, which, by the way, are generating more than twice the revenue of Tiffany & Co., the latest studies show. 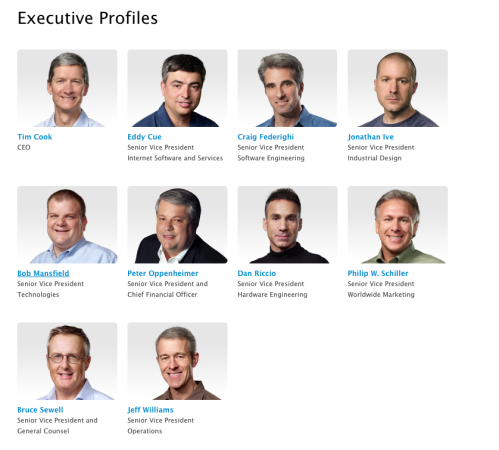 So, who is the best fit for this job, to fill the missing void and help Apple retail grow? It certainly won’t be an easy job, as “Apple’s next frontier is to really grow the brand internationally”, according to Neil Stern, a senior partner at retail consultancy McMillan Doolittle LLP, talking to AllThingsD.
Here are a few names AllThingsD considers to be possible external candidates for this job:

“All five are well qualified. They’re working for global brands with a strong consumer focus and broad international presence. Ahrendts has spent years stewarding one of the world’s most iconic global brands. Luis has spent years steering Coach’s international operations and, crucially, served as CEO of Coach China. At Nike, Jackson is working for a company with a culture similar to Apple’s, one on whose board CEO Tim Cook served; she also used to run Banana Republic and Walmart.com. Culver has played a key role in growing Starbucks’ global footprint in markets that are of keen interest to Apple, and has done a good job of translating the company’s culture internationally, which isn’t an easy job. Gainer has been overseeing the Disney Store since 2008, when the company reacquired it, and now directs a global retail chain that’s in many ways reminiscent of Apple’s. His boss, Disney CEO Bob Iger, sits on Apple’s board,” AllThingsD writes.

However, there are a few interesting aspects of this job. First, the person who takes the role doesn’t need to build the whole system from scratch; the innovation is already there, they may only need to execute others’ good ideas.

From this perspective, an inside look at retail leadership could make sense, and Apple indeed has options:

And the background information points to Cano, Needham analyst Charlie Wolf said, because he started out as the manager of Apple’s first Soho store.  Then he transferred to the company’s Ginza store in Japan to manage its opening and early days. Subsequently, he transferred to London to run international retail operations. And now he’s head of all Apple Stores.
One thing Apple will keep in mind when choosing the best candidate for this job is pushing consumer satisfaction higher than ever. The key to its success are the Apple customers who visit the Genius Bar. Simply put: the candidate will have to have the solution for keeping the customers happy.