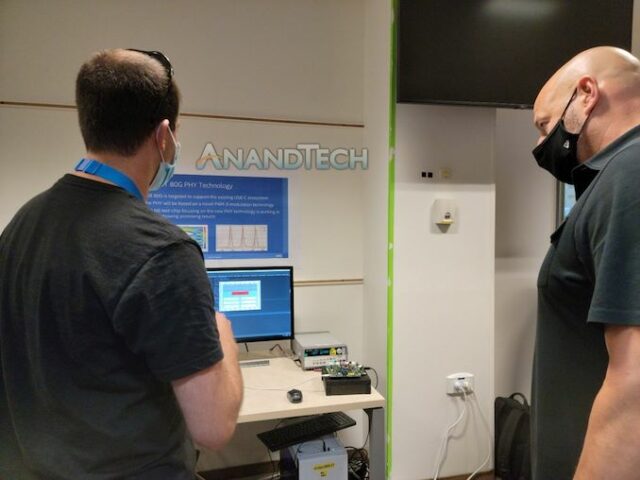 Intel executive Gregory Bryant accidentally published a photo concerning Thunderbolt 5, leaking details. The photo, which was taken at an Intel R&D lab in Israel, was then quickly deleted as it seemingly confirmed 80GBps bandwidth.

EVP and GM of Intel’s Client Computing Group, Gregory Bryant posted a series of photos of his trip to Isreal while on business to Twitter. One photo, as reported by AnandTech, shows Bryant standing in front of a monitor with a poster above reading “80G PHY Technology”.

Day 1 with the @intel Israel team in the books. Great views…incredible opp to see @GetThunderbolt innovation …a validation lab tour and time with the team…can’t wait to see what tomorrow brings! pic.twitter.com/GKOddA6TNi

The poster effectively suggests that Thunderbolt 5 could support up to 80GBps, which would double the current 40GBps of Thunderbolt 4. Additionally, another line of the post appears to read “USB 80G is targeted to support the existing USB-C ecosystem,” which appears to be in reference to Intel aiming to maintain the use of  USB-C while doubling the bandwidth.

Finally, a third line of the poster states that “The PHY will be based on novel PAM-3 modulation technology”. According to the report, PAM-3 would effectively use a 3-bit data signal. This would then enable Thunderbolt 5 to achieve higher bandwidth than standard non-return-to-zero (NRZ) and PAM-4 has been proven to produce in the past.

There’s no clear indication of when and if Thunderbolt 5 will be launched. Additionally, it’s unclear whether Apple will support Thunderbolt 5 in its future devices. However, the prospect of Thunderbolt 5 reaching 80GBps bandwidth is appealing.