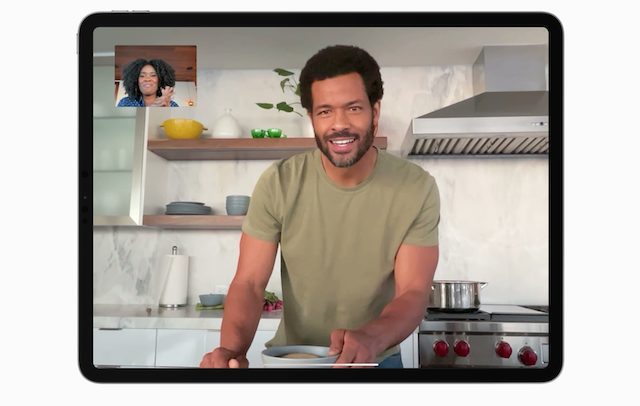 During its ‘Spring Loaded’ event, Apple announced that the new M1 iPad Pro would sport a feature dubbed ‘Center Stage’. This feature uses the device’s front-facing camera paired with machine learning to track the subject during a video call. It’s now been confirmed that the feature can not only be used with FaceTime but additional third-party video conferencing apps.

The Center Stage feature comes at a time when many are utilizing video conferencing tools to keep in touch with friends, family, and co-workers. Apple has identified a key issue with how video conferencing, at least on Apple devices, is conducted. The obvious hurdle of sitting on a video call is framing and staying within the frame of the camera for the other participants. Center Stage hopes to mitigate those problems.

During the event, Apple demoed Center Stage within a FaceTime call. The demo showed two participants who moved around their kitchen and home and were successfully tracked. The feature utilizes the 12MP ultrawide front-facing camera on the new M1 11-inch and 12.9-inch iPad Pro. Center Stage is also made possible thanks to the device’s TrueDepth system and chip. Although the FaceTime demo was an overall success, Apple never took the opportunity to touch on other video conferencing apps such as Zoom or Microsoft Teams.

Center Stage, the new iPad Pro feature that uses the front-facing camera to automatically follow the user during video calls, is *not* exclusive to FaceTime. Third-party apps can use Center Stage and there’ll be an API available to toggle it on/off. #AppleEvent

Additionally, over on the iPad Pro landing page, Apple itself confirmed that “Center Stage works with FaceTime and other video conferencing apps for an even more engaging experience.”

As the pandemic continues, devices and software that help bring people together in new ways are always welcomed. Apple’s Center Stage feature harkens to tracking features offered through the Echo Show 10, and Portal TV. However, this will be a nice addition for Apple users and those who pick up the M1 iPad Pro in May.