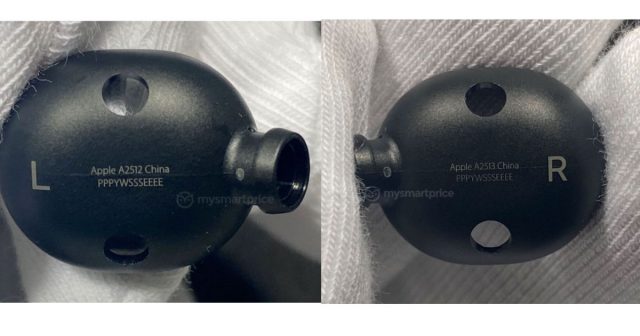 Images depicting Apple’s unannounced Beats Studio Buds have reportedly surfaced. The new wireless earbuds have been rumoured to be in production with an expected release sometime soon. Now, thanks to MySmartPrice, we have a rough idea of what the design may look like.

Based on the reported images, the Beats Studio Buds have an in-ear design, similar to the design of Samsung’s Galaxy Buds Pro. Apple’s new wireless buds appear to be circular in design and look to house a couple of sensors or perhaps speakers within the two cutouts. The images also show product information labelled on each of the wireless buds. The images MySmartPrice has obtained only contain the housing unit. No images of the full, completed design have been obtained.

Although the images of the Beats Studio Buds’ exterior look authentic enough, MySmartPrice has said that the images were received from unknown sources. That said, readers could always reserve some skepticism until Apple officially announces the product themselves and shows off the completed design.

There’s still no word on when to expect an official announcement from Apple nor a release window.

Apple CEO Tim Cook recently sat down for an interview with BBC. Throughout the interview, Cook addressed the topic of the lack of women in the tech industry. On top of that, the CEO discussed EarPods, as well as the expected impact AR may have in the coming years. While speaking with BBC, Cook made...
Steve Vegvari
22 hours ago