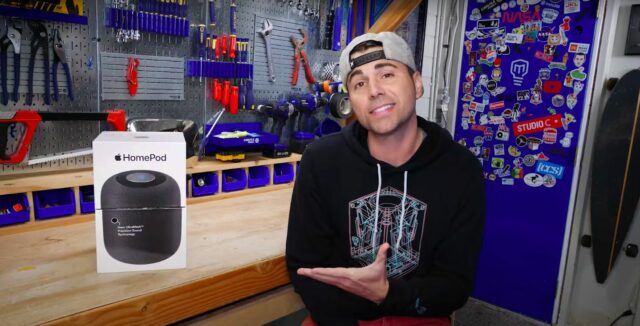 It’s that time of year again. Former NASA engineer turned YouTuber Mark Rober is back with his annual glitter bomb video for the holiday season. Sticking it to the porch pirates who steal packages and gifts from people’s front doors, Rober’s latest bait package innovation is disguised as an Apple HomePod.

The concept of Rober’s first glitter bomb video was very simple. Create a unique device that once stolen by a thief, would spray glitter and emit fart spray and record them, much to the dismay of the thief. Over four years, Rober’s creation has evolved. Every year Rober outdoes himself by adding recorded voice effects, lights, and more. This year is no different.

As usual, Rober brought his engineering prowess to design a new glitter bomb-spewing machine, featuring a new pneumatic system for a pop-up lid. Every bit of the new Glitter Bomb 4.0 has been refined. An added car horn effect has been added to give the thieves a bit more of a scare when the mock HomePod box opens just before shooting glitter.

Speaking of glitter, the glitter chamber has been upgraded with two cups, allowing a total of three waves of glitter to spin out and cover the thief and their surroundings. An onboard microphone has also been included to continuously record audio from the thief.

What ends up happening is a series of thieves stealing Rober’s custom-designed “HomePods” and receiving a lesson in why you shouldn’t steal. Without divulging any of the great moments in Rober’s video, it’s worth checking out on your own. It is genuinely interesting to hear how Rober and his team innovated on this year’s Glitter Bomb 4.0. That said, it’s even funnier to see the would-be thieves snatch up a rather comically large HomePod and have their day ruined.

Rober’s videos are becoming more and more of a staple of the holiday season and this year is his best yet.