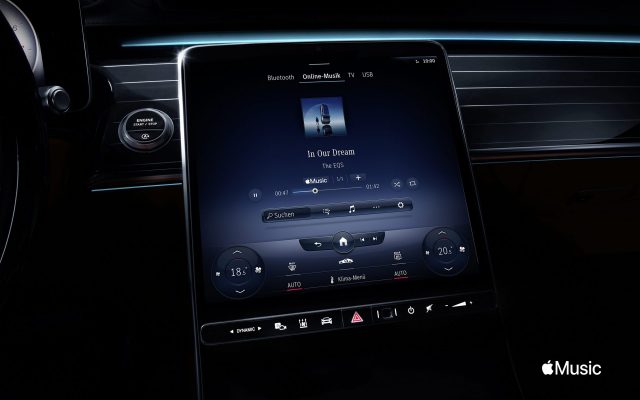 Mercedes-Benz has announced that Apple Music is being added to its MBUX infotainment system. This integration will begin with the company’s C-Class, S-Class models. Later this summer, EQS model owners will be able to take advantage of this integration as well.

In a press release, Mercedes-Benz revealed the news that Apple Music would be joining the fray and be accessible in the MBUX infotainment system. Users must simply link their ‘Mercedes Me’ online account to their vehicle. Afterwards, Apple Music subscribers will gain access to 75 million songs, thousands of curated playlists, and radio stations including Apple Music 1, Apple Music Hits, and Apple Music Country.

“We use the possibilities of digitization through over-the-air updates to make the time our customers spend in their Mercedes as entertaining and fulfilling as possible. The seamless integration of online music streaming offers customers digital access to their own personal music enjoyment. With Apple Music, we have now fully integrated another service that fits perfectly into the Mercedes-Benz online music portfolio,” says Sajjad Khan, Member of the Board of Management of Mercedes-Benz AG and CTO.

As part of the integration, drivers can say, “Hey, Mercedes” while using the MBUX voice assistant to make requests and change songs, albums, playlists, etc. Users can also use the on-board display to make changes to their song selections as well.