Edward Colligan, CEO of Palm, has revealed that the late Apple co-founder and CEO Steve Jobs threatened patent litigation if Palm wouldn’t agree to stop hiring Apple employees. Colligan made this allegation in a statement dated August 7th, 2012, which has been brought forward by Reuters, in the light of recently released evidence shedding light on Silicon Valley’s no-hire agreements during the mid-2000s (via The Verge). 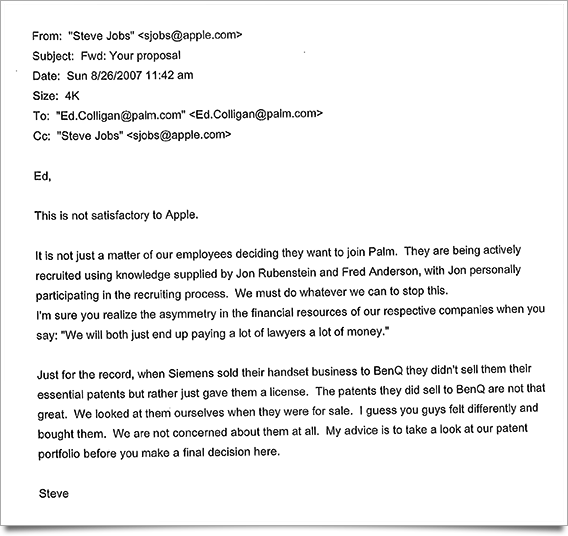 Steve Jobs proposed eliminating competition between the two companies for talent, according to Colligan’s statement. “Mr. Jobs also suggested that if Palm did not agree to such an arrangement, Palm could face lawsuits alleging infringement of Apple’s many patents,” said Colligan. Furthermore, another email to Eric Schmidt by Jobs also reveals the beginnings of his “thermonuclear war” attitude, in which he demands Google’s cellphone software group stop “relentlessly recruiting” in Apple’s iPod group.

In his statement, Colligan says he received a call from Jobs in August of 2007, expressing concern about Palm’s hiring of Apple employees. He goes on to say that Jobs “proposed an arrangement between Palm and Apple” that would stop the practice, also suggesting that “if Palm did not agree to such an agreement, Palm could face lawsuits alleging infringement of Apple’s many patents.” Colligan later responded in an email, suggesting that any such agreement would likely be illegal and that Palm had patents of its own that it could use to countersue. Jobs replied, writing, “I’m sure you realize the asymmetry in the financial resources of our respective companies when you say: ‘We will both just end up paying a lot of lawyers a lot of money.’”

In 2010, Google, Apple, Adobe Systems Inc, Intel, Intuit Inc and Walt Disney Co’s Pixar unit agreed to a settlement of a U.S. Justice Department probe that bars them from agreeing to refrain from poaching each other’s employees.