Last week, Android Central posted a screenshot that showed smartphone price changes coming to AT&T. Based on the screenshot, AT&T was (and has) increased “early upgrade” pricing by $50 for all iPhone models. 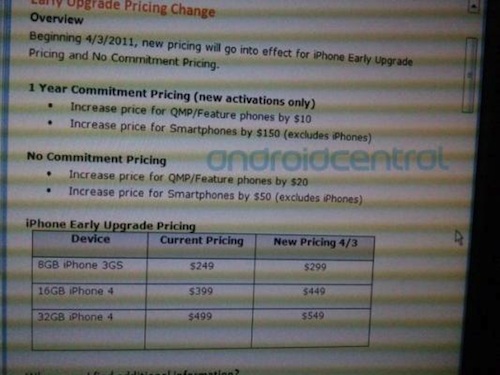 It is good to note the change made by AT&T, as AT&T policy updates sometimes have an effect on the Canadian carriers. At this time, Rogers/Bell/Virgin Mobile/Fido have not increased early upgrade pricing for any iPhone devices. These carriers simply do not allow customers to renew their contract early to get a new device until they have reached their eligibility date (unless there is a promotion).

In the last few years however, Rogers/Fido have allowed customers to upgrade early, in most cases at full promotional pricing, whenever a new iPhone was released.

For a review of the standard eligibility dates, see below (does not reflect occasional upgrade promotions):

Telus on the other hand has recently introduced a type of price increase for early upgrades, but it is not a flat $50 fee like with AT&T. With Telus, customers pay a monthly fee for every month they are upgrading early before their eligible date plus the promotional cost of the iPhone device.

For example, a Telus customer wanting to get an iPhone device early:

It will be interesting to see if the other Canadian carriers adopt a similar pricing strategy to Telus, go the way of AT&T by increasing early upgrade prices, or do nothing. Let’s hope for the latter, especially in terms of price.