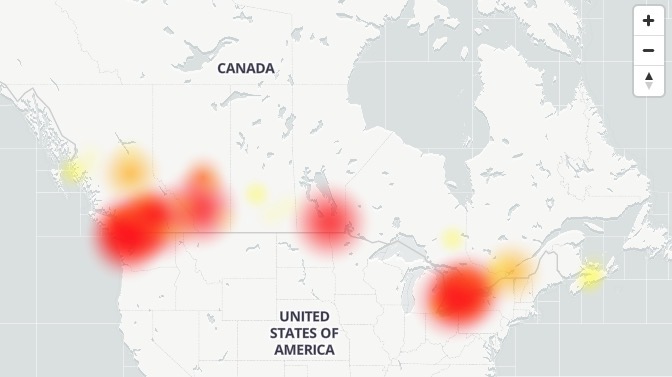 A wireless service outage that started on Saturday and into Sunday is still ongoing for some Bell and Rogers customers in British Columbia and western Canada.

According to Bell, the company tweeted out a fibre line was damaged in the Fraser Canyon community of North Bend, which apparently saw a rock slide:

“Damage to a third-party’s fibre line near North Bend yesterday afternoon has impacted calling for some Bell Mobility and Virgin Mobile customers in BC. Mobile data, text messaging and calls to 911 are not affected. However, some customers may be experiencing disruptions…with making or receiving calls from landline numbers or customers of other wireless providers. Our crews continue to work with other carriers to restore full services as soon as possible.”

Customers from Rogers, Fido, Bell, Virgin and Telus saw interruptions with their LTE connections and voice services across B.C.

@Rogers is your mobile connection for western Canada down again this morning? Expect regular service to consistently be back online? #RogersOutage #RogersMobile

Yes! I’ve had landline issues since yesterday afternoon at my business. Still no line this morning! @Rogers

My cell phone hasn’t been working since Friday, people cannot call me & every time I call out I get the message “the customer you are trying is currently not available, try again later”. I just switched from bell to virgin but they are on the same network

@Bell_Support @Bell What is your update this am for Metro Vancouver? Still no service @telusmobility are your phones working?? I understand you share some towers w Bell? If this continues may need to switch! Been w Bell 12 yrs! Never any problems! @NEWS1130

According to CBC News, Rogers says the outage was caused by a landslide that damaged a fibre cable.

Numerous Rogers customers tweeted for help on Twitter. The company responded with updates via replies and direct messages. Calls made between Rogers customers are working normally, however, some customers may have issues making or receiving calls with other providers such as Bell or Telus, for example. Rogers is working with other carriers to fix the problem, which originates outside the company.

“It looks like you are affected due to an outage which is being worked on,” said @RogersHelps.

North Vancouver RCMP and Metro Vancouver Transit Police saw their non-emergency lines go down but service has since been restored. The City of Coquitlam also saw its landlines go down yesterday, but said it was working with Bell to fix the issue.

Transit Police alert: We are currently experiencing a technical issue with our phone lines. We are working to resolve the problem. If you need Transit Police, please text 87.77.77. Our text service is unaffected. Always call 911 in an emergency. pic.twitter.com/3cXE0x7Tlu

#Bell advises cell voice services not working in BC. #Bell customers can dial 911, but will not be able to access non-emergency lines until it’s systems restored. Pls do not call 911 for non emergencies. No ETA on repair. Follow @Bell_Support for updates. #911BC

According to Rogers, it told CBC News cellular service was also down in Alberta, Saskatchewan and Manitoba yesterday, but restored by mid-afternoon.

Update Feb. 2, 1:15pm PDT: Rogers’ wireless data service was fixed and back online on Saturday after landslides affected fibre lines. Some Rogers customers might have an issue with outgoing and incoming calls with other providers, but Rogers to Rogers calls are working normally.