Bell today announced Alt TV, its mobile TV service which allows customers to watch TV anywhere on any device, without the need for a set top box or cable subscription. But there’s a catch: Alt TV requires Bell Fibe Internet. 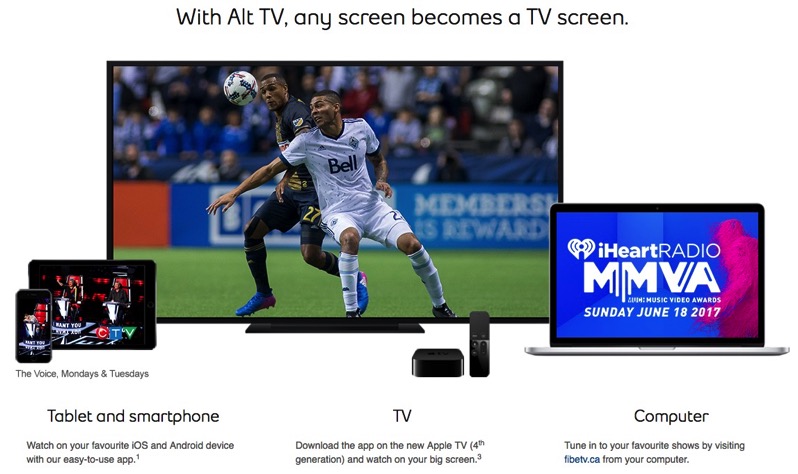 The service is being touted as Canada’s “ first widely available app-based live TV service”, and will be available for $14.95 per month, which includes 30 channels. The launch will kick off for customers in Ontario and Quebec, with plans to expand later in Atlantic Canada and Manitoba. The service will offer access up to 500 live and on demand channels, “more than any comparable service in the world,” says Bell.

Bell says customers viewing Alt TV at home won’t have to worry about data usage or fees, because the service “operates as a licensed broadcast service on the privately managed Bell Fibe broadband network for in-home viewing, and on mobile or Wi-Fi networks outside the home.”

Customers will be able to view Alt TV through the Fibe TV app on iOS, Apple TV 4, Android, web browsers, with plans to expand to Android TV later in 2017. The service will allow up to two TV streams at a time, while customers can also customize their Alt TV packages.

The service looks to target TV ‘cord-cutters’, who want basic TV without paying for a cable TV package, and are still subscribed to Bell Fibe Internet. Is paying 50 cents per day to watch traditional cable TV worth it to you? Let us know if you’re going to be getting Alt TV.