With the release of iOS 12.1, it also brings Dual SIM support for the iPhone XS, iPhone XS Max and iPhone XR (China does not get eSIM; Macau and Hong Kong get eSIM on iPhone XS).

Dual SIM means you can use two cellular plans at the same time, while eSIM means your second line is activated on a digital SIM, no SIM card required. Bell is the only wireless carrier in Canada so far to support eSIM.

The first eSIM customer activated his iPhone XS Max with Bell this morning. Here’s what it looks like, according to iPhone in Canada reader Dean Lubaki:

As you can see under Control Center, the upper left shows he’s connected to TELUS for his primary line and Bell as the secondary line. Lubaki says he activated a Bell prepaid plan on eSIM and according to an email from a Bell executive (we verified the email), he is the first customer to activate this in Canada.

Users will require iOS 12.1 if they wish to use eSIM.

Users are able to set up which line they want as default, which will be used for iMessage and phone calls. Users can also set up their secondary line for cellular data only as well. You can also specify which line to be used for specific contacts. 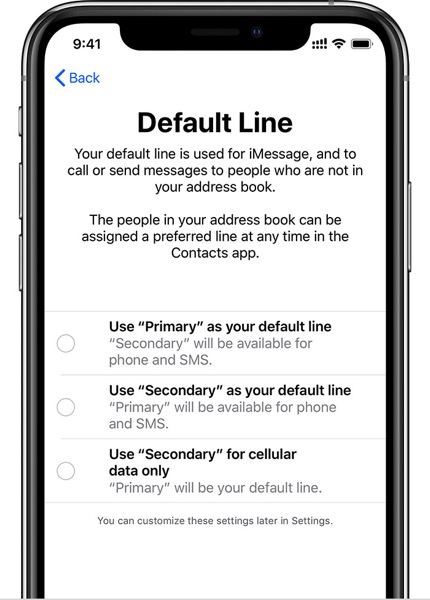 You can learn more about using eSIM on Apple’s support page here. Let us know if you’ll be activating eSIM on Bell. No word when Rogers or Telus will support eSIM, yet.