In an effort to make cellphone towers blend into their environment, Bell plans to build 20 towers disguised as pine trees in Muskoka, north of Toronto.

The steel towers would be 25-29 metres tall and rise up above existing trees, covered with fibreglass branches, and set to be installed in May. Since they will be built on private land, it does not require municipal approval to build. This idea isn’t new, as parts of the U.S. have long had cell towers in disguise.

Not everyone thinks they look ‘natural’ though, as the Alice Murphy, mayor of Muskoka, told the Toronto Star they are “like a white pine on steroids,” but she of course welcomes the towers for better reception, since the area is popular during the summer.

Here’s a picture of the ‘pine tree’ cellphone tower below: 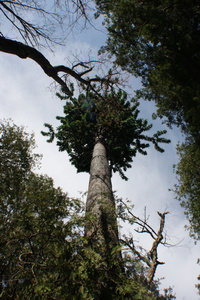 What do you think? Yay or nay? Wood you want to see one of these in your community? I think it’s a great idea, as regular cell towers are an eye sore. Kudos to Bell.