After Fido launched a 50% off promo on their Home Internet for customers in Ontario last week, it now appears Virgin Mobile has done the same.

Bell’s flanker brand is showing on its website customers can save 50% off Home Internet for 12 months, “when you hook up on our 50Mbps Unlimited plan.” Users are told to call to get information on this deal, which ends on April 30th. 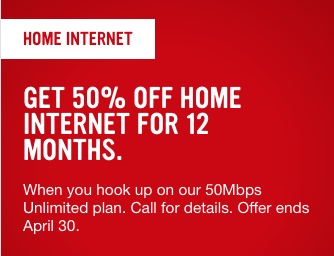 Virgin Mobile’s 50Mbps plan offers download speeds up to 50Mbps and upload speeds of up to 10Mbps, with unlimited monthly data usage, priced at $60 per month, with modem and installation included. The $30 per month savings for one year works out to $360.

While Fido’s plan offers slightly faster download speeds of 75Mbps, it also is only available for those with an eligible Fido mobile plan.