‘Big 3’ iPhone 4S Pre-Order Report Card: How Did They Do? 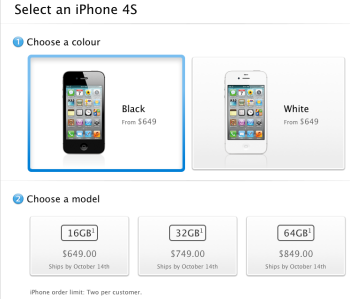 The iPhone 4S launched yesterday to line ups across the country. For those that didn’t line up, online pre-orders from Apple actually arrived on time (while some are still in transit).

But what about iPhone 4S ‘reservations’ offered to customers from Rogers, Telus, and Bell? How well did these carriers and their brands handle the iPhone 4S launch?

Rogers iPhone 4S reservations are still stuck in limbo, and the same can be said for pre-orders from Telus and Bell. What carrier handled the iPhone 4S pre-order the best based on your experience and that of your friends and family? I’ve added Fido, Virgin, and Koodo to the list as well.

Take your vote below:

Have you received your carrier reserved iPhone 4S yet?

An expert witness hired by Rogers in its ongoing Competition Tribunal hearings against the Competition Bureau testified on Friday that the proposed sale of Shaw-owned Freedom Mobile to Quebecor's Vidéotron will create a "near-national" fourth wireless operator capable of competing with the Big Three (via the Financial Post). Rogers and Shaw have offered to sell...
Nehal Malik
23 hours ago