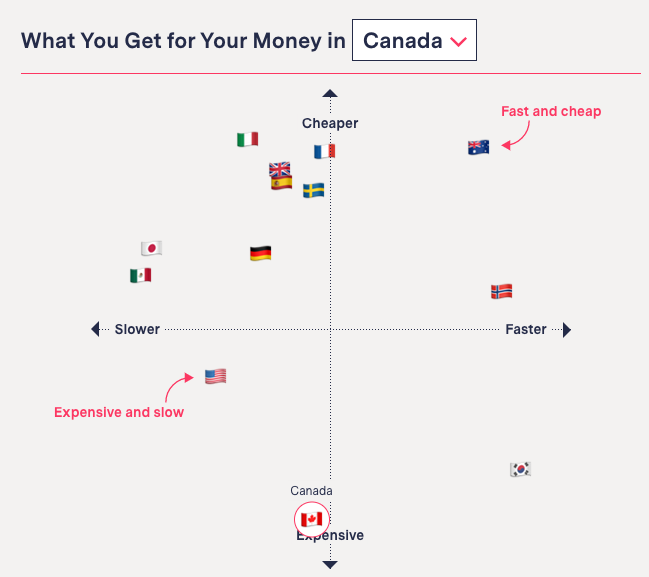 According to a new study from nonprofit newsroom, The Markup, Canada’s wireless data prices are the most expensive in the world out of 28 countries tested.

“In Italy, which has some of the cheapest data plans in the world, checking your Twitter feed will cost you a penny—compared with 15 cents in Canada, which is among the world’s priciest places to refresh an app,” explains The Markup.

In a chart named, “What you get for your money in Canada”, we rank as the most expensive out of 28 countries tested.

Despite being the most expensive, Canada ties for second place with France and Sweden when it comes to the speed required to load a website that’s 2.9 MB in size at 0.9 seconds. South Korea, Norway and Australia are in a three-way tie for first at 0.6 seconds. 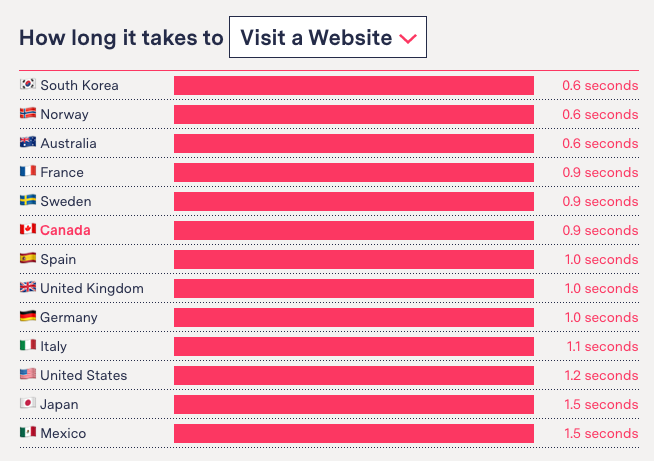 “In Canada, despite the recent introduction of unlimited plans, the overwhelming majority of packages still have data caps. Since Canada has such a large landmass, new companies struggle to establish reliable nationwide networks,” explains The Markup.

“As a result, only three national networks exist and can charge extra for that coverage. However, some costs vary regionally. Residents of Saskatchewan, for example, get access to SaskTel’s cheaper plans because the network provider maintains service only in that province,” the website adds.

Charts compare “How much it costs to…” 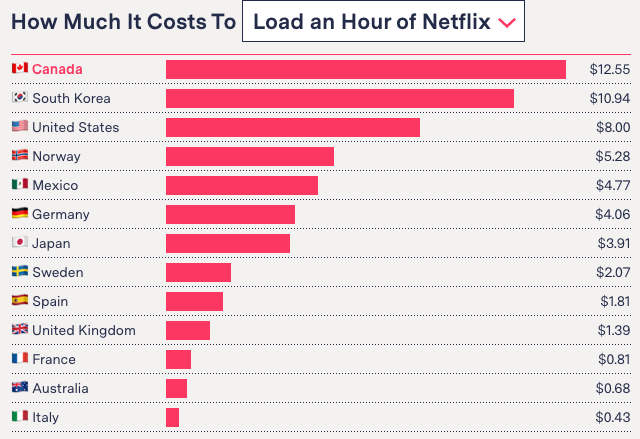 Out of these four tests, Canada ranked the most expensive based on mobile data prices from a 2019 Cable.co.uk study.

Update September 4, 2020: A Telus spokesperson reached out to iPhone in Canada to say there are “significant flaws” in The Markup report on Canadian wireless data pricing.

“First of all, the quality analyses are pulled from 3 years ago, 2016, whereas the wireless plan pricing information was pulled from a report that gathered data in 2019 according to the article (the link, when followed actually says data was gathered in 2020),” explained Kalene DeBaeremaeker, Senior Communications Manager, Public Affairs, at Telus.

“Furthermore, the Cable.co.uk report has significant methodological flaws. They extrapolated a cost per GB by examining numerous rate plans and data buckets. While this does show that there is a tremendous range of products available and consumers pick the one that suits, it also shows what consumers pay for their total plan, not per GB. Dividing the plan by GB is not an accurate measure of the cost paid. Additionally, the study notes important ‘archetypes’ which clearly outlines key variables that inform how the wireless data pricing of a jurisdiction may be calculated. These include economy, quality of infrastructure, population density and more. This is not properly demonstrated when simply looking at the figures of one jurisdiction compared to another,” added DeBaeremaeker.

DeBaeremaeker further noted, “Cable.co.uk also has their own speed testing, which differs from the speeds The Markup uses. Why would Markup not choose to use the speeds included from the same study?”

The Telus Senior Communications Manager then directed us to other wireless price studies, specifically linking to this Calgary Herald op-ed, written by economist Dr. Christian Dippon, who was asked by Telus to review the cable.co.uk study.