Canada’s Telcos Have the Highest Wireless Revenue Per Gigabyte vs The World: Study

The latest report from Sweden-based tefficient has been released, which analyzes mobile data usage and revenue from wireless carriers worldwide, including the latest data from Canada.

According to University of Ottawa Law professor, Michael Geist, he explains the report “shows Canada as a global outlier when it comes to the revenues generated by wireless carriers. The report notes the unsurprising correlation between high prices and low data usage.”

According to tefficient’s 20-page report (emphasis ours):

In other words, wireless revenue from Canadian carriers per gigabyte is among the highest in the world; along with some of the highest revenue per user, but also the lowest usage. The tefficient chart below explains it all—look at Canada isolated on its own on the far right: 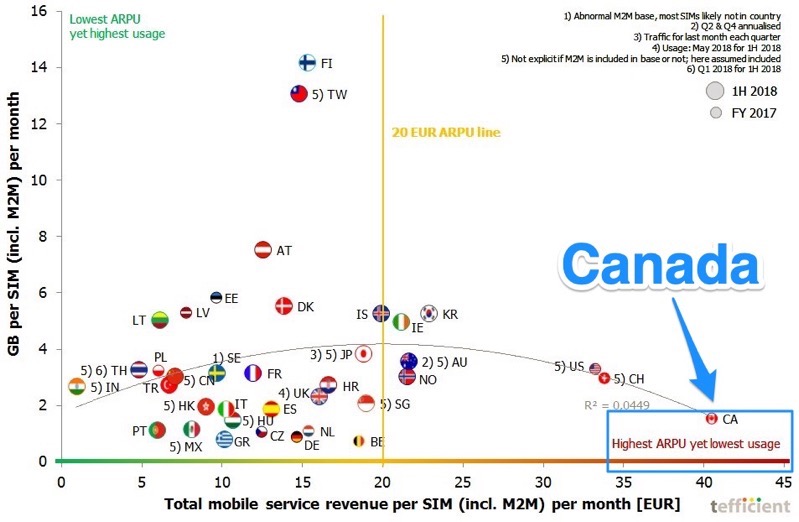 The report says, “of our studied markets, there are three where operators derive ARPUs much higher than elsewhere: Canada, Switzerland and the USA,” adding “Canada’s data usage is low while Switzerland’s and USA’s is about average.”

According to a recent study commissioned by Telus, the carrier concluded comparing Canadian wireless prices versus the world is “meaningless”, as various (cherry-picked) factors should be taken into consideration for an equal comparison.

As Geist concludes, with all this data in front of the federal government, it boils down to what Innovation, Science and Economic Development Minister Navdeep Bains and the CRTC will do about high wireless prices in Canada, if anything.