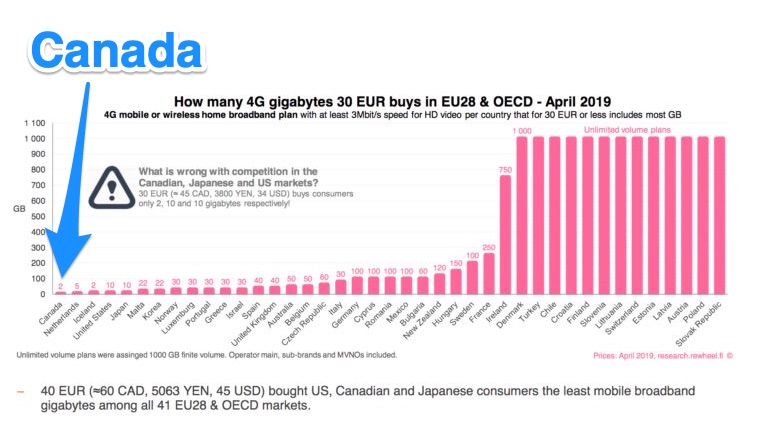 Finland-based consultancy, Rewheel Research, has shared another report detailing the cost of wireless data amongst the developed world, and again, Canada’s pricing is ranked among the most expensive.

The consultancy group joined Dr. Michael Geist on the latter’s podcast, Lawbytes, to discuss more about the company and also about Canada’s high wireless data prices.

Antonios Drossos, the managing partner of Rewheel, touted the independence of their firm and how they conduct their research. The company is actually mainly focused on consultant work, while the independent research “is a side thing.”

Drossos explains how even Canada’s Competition Bureau had recently gained access to their raw data collected over the past five years to draw their own analysis on the wireless market here.

When it comes to maintaining the organization’s independence, Drossos detailed how they were asked by Telus if they wanted to be paid for a commissioned study, but Rewheel declined, as they do to all companies, since the work they do is independent and targets independent authorities and policymakers.

As for the April 2019 Rewheel Research data, when it came to how many 4G gigabytes could be purchased with 30 EUR ($45 CAD) among 28 European Union (EU) countries and Organisation for Economic Co-operation and Development (OECD) nations, Canada ranked dead last, with only 2GB available for $45 CAD.

When it comes to country median gigabyte price in 28 EU countries and OECD nations, Canada has some of the highest pricing in the world versus other countries with multiple mobile network operators (MNOs).

Geist notes Telus has commissioned their own wireless study by NERA to challenge the Rewheel wireless data report. The Telus study called out the Rewheel report as “a highly simplistic ranking exercise” saying it is an “apples-to-oranges comparison”.

“Short of a complete redesign of the study’s methodology, there is no simple fix. Consistent with other international price comparisons, such a redesign would correct for Rewheel’s data collection errors (e.g., exclude all taxes) and employ an econometric model that considers, or normalizes, for the differences in plans, networks, and country-specific cost structures, among other factors. Absent these corrections, the Rewheel study results provide no meaningful insight into prices—let alone competition.”

What do you think about wireless data prices in Canada? Anyone who’s travelled outside of the country (especially overseas) will know how much cheaper it is to use a cellphone with a data plan.