According to Rewheel’s study shared with us, prices in the Canadian wireless market “continue to be the highest or among the highest in the world” in the second half of 2021, says managing partner Antonios Drossos in an email.

To give a sense of the huge price wireless price differences comparing Canada and the rest of the globe, if we look at a wireless plan with at least 100 gigabytes of 4G or 5G data and, 1000 calling minutes, it’s 13 times more expensive here versus France, detailed Drossos.

When we asked Rewheel what their response would be to telcos and select industry critics that frequently dismiss their pricing studies as inaccurate, Drossos shared a real-time screenshot comparing Rogers, Telus and Bell prices for 100GB of data versus five French carriers.

“Canada has, if not the highest, among the highest wireless prices in the world. The minimum monthly price for a smartphone plan that includes 20 gigabytes in Canada is the highest among 51 European, American, Asia Pacific, Middle East and African countries. Consumers in Canada pay 7x more every month than consumers in France for 20 gigabytes,” details Rewheel’s study, which says the cause for high prices here is due to our “de-factor network duopoly.” 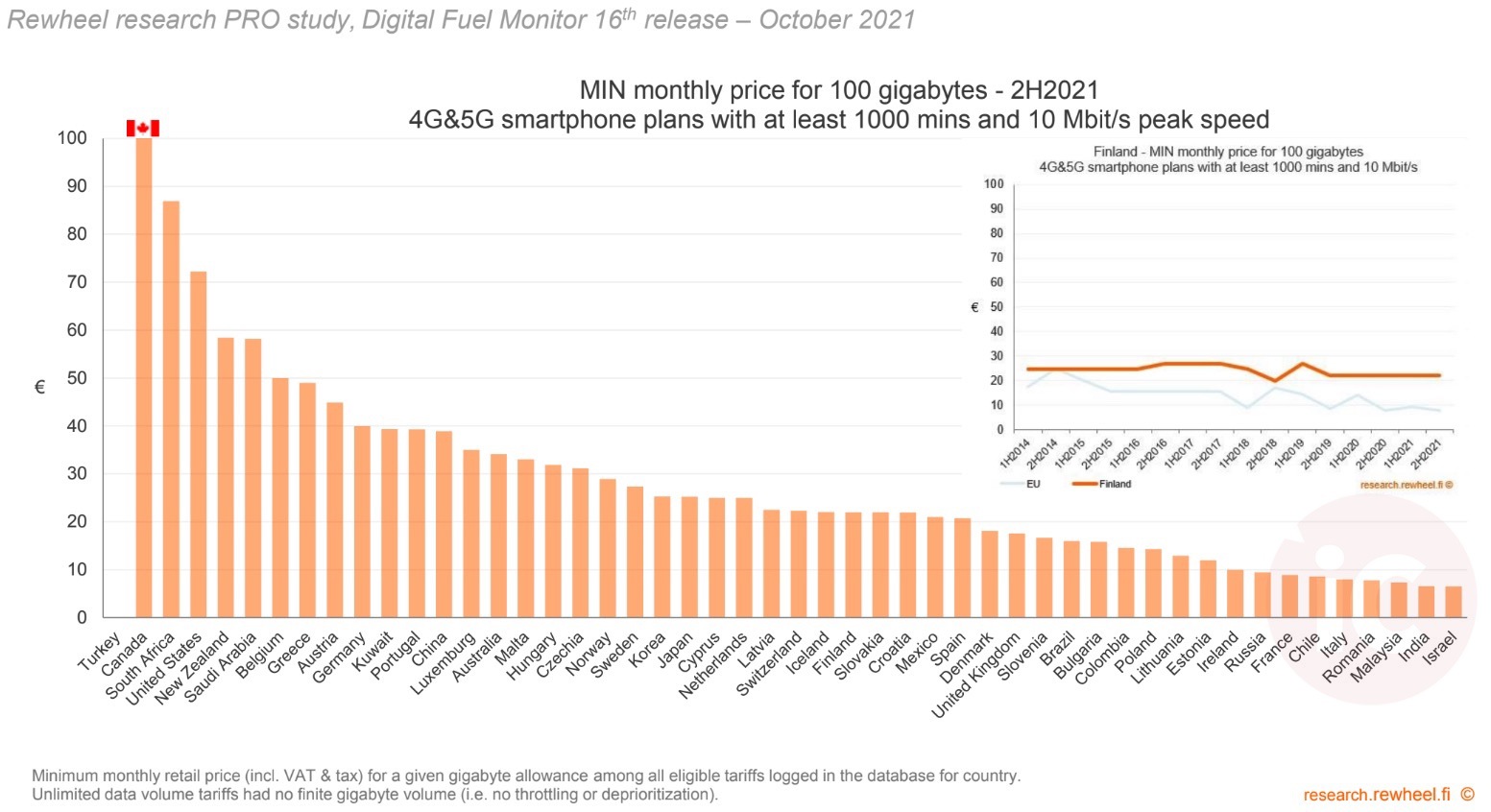 Canada also has the most expensive monthly price for users looking to use 1 terabyte of 4G or 5G wireless data, says Rewheel’s report.

You can check out Rewheel’s chart here shared with iPhone in Canada, detailing prices of 100GB data versus the world.

As for the impacts of the proposed Rogers-Shaw merger? Rewheel believes it would “further concentrate retail market shares and most importantly consolidate probably beyond repair the network layer.” The merger would also “most likely significantly impede competition in the Canadian wireless market and result in higher prices and consumer harm,” added Rewheel.

Other countries with high wireless prices other than Canada? That would be South Africa, Greece, Saudi Arabia and Japan. Countries with the lowest wireless prices? That group includes Russia, Israel, India, Malaysia, France, Italy, Poland, Romania, Colombia, Brazil and Chile.