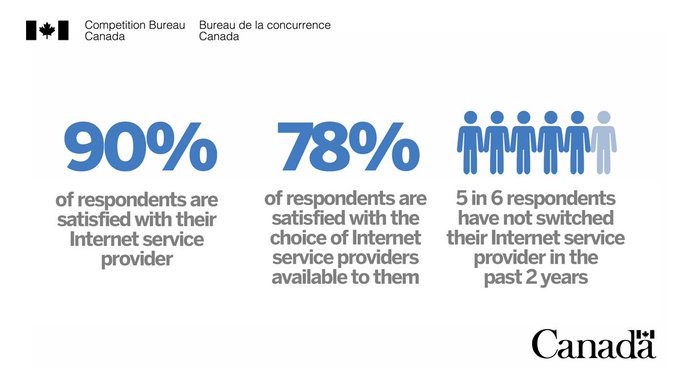 Some more groundbreaking conclusions are coming from the federal government, as the Competition Bureau has concluded independent Internet providers bring benefits to Canadians.

According to the Competition Bureau, over 1 million Canadians are using an independent Internet service provider as of 2019, for their high-speed Internet.

The study concluded 90% of Canadians are “generally satisfied” with their current Internet service provider (ISP), but those of independent ISPs are “more likely to be satisfied.”

The Bureau also found 1 in 3 households that considered switching ISPs in the past two years actually made a switch, while 66% of households have their home internet bundled with at least one other service, with only 17% tied to wireless phone services.

“High-speed Internet is the engine of our rapidly growing digital economy. This study is part of our broader efforts to promote competition and innovation in this industry, so that more Canadians benefit from lower prices and increased choice in Internet services,” said Matthew Boswell Commissioner of Competition, in a statement.

“The Bureau’s study of competition in Internet services is designed to inform future regulatory reviews in the industry, such as the CRTC’s upcoming review of wireline wholesale services,” explains the Bureau. The data in the report is to help better equip regulators and policymakers, which in turn “will help Canadians benefit from competitive high-speed Internet options.”

Earlier today, the CRTC released its latest Communications Monitoring Report, which examines wireless pricing. The Commission said it found wireless prices in Canada on average had dropped 28% from 2016 to 2018.

All of these glowing studies released now make the federal government appear to be white knight protectors of Canadians. Is a federal election around the corner or something?

OpenMedia is calling on Innovation, Science, and Industry (ISED) Minister François-Philippe Champagne to take immediate steps to halt the rapid decline of Internet competition in Canada, with the non-profit saying "Internet choice and affordability in Canada approaches breaking point." Even though the federal government announced a new telecommunications policy direction for the CRTC in May, competition...
Usman Qureshi
15 hours ago