Canadians are increasingly frustrated with their wireless service providers according to the Commissioner for Complaints for Telecommunications Services (CCTS) report. This is the conclusion drawn after the CCTS accepted 13,692 complaints between 2012 and 2013, up 26% year-over-year. Who are the service providers you should avoid based on the CCTS study? You’ll find out after the jump.

The most common complaints were related to billing errors, regarding a customer’s monthly price plan, which accounted for 11.5% of all complaints or 2,224, followed by loss-of-service and repair issues, which accounted for 10.8% or 2,080 complaints. Canadian wireless subscribers have also commonly complained about the 30-day notice for cancellation, early termination fees, and non-disclosure of terms, or misleading information about terms, among others.

Obviously it’s all relative to the number of subscribers, held by each player. So, to get the full picture we’ve done our math homework: for Rogers if we add Fido and Chatr Wireless the total is 35.16%. In the case of Bell, we need to add Virgin Mobile and Solo as well, so the total is: 35.23%, while for Telus, there is Koodo, to complete the picture, so the total is 7.9%.

Over 90% of all complaints accepted by the CCTS were successfully resolved to the satisfaction of the customer or the service provider.

To make the report more visual we compiled a list, which you will find below. 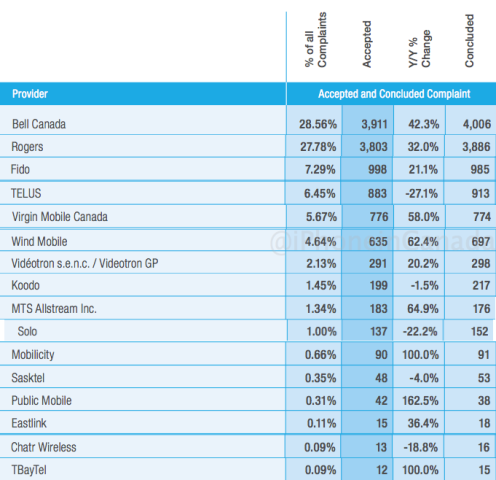 The Canadian Radio-television and Telecommunications Commission, the country’s broadcasting and telecommunications regulator, announced on Monday morning its website and phone lines are down for the count, in what appears to be an unscheduled outage. “Please note that our website, its related applications and phone lines are temporarily unavailable, we will update you as soon as […]
Gary Ng
3 hours ago