Last week, Rogers, Telus and Bell submitted their proposals to the CRTC, detailing lower-cost, data-only plans for wireless users, which started at $25 for 400 MB of LTE data from Rogers, and $30 for 500 MB from Telus and Bell, respectively.

These proposals for data-only plans have now been slammed by critics as unreasonable offerings, while Canadians who have commented on the public consultation have similarly called them out as being inadequate and downright insulting.

Tribe says the ‘Big 3’ should offer lower-cost data-only plans based on the recent holiday $60/10GB promo plan, but “Instead we’re seeing $30 a month for 500 megabytes being pitched.” She says “It’s outrageous.”

To date, there have been 251 comments left by Canadians on the public consultation process. Below, we’ve listed some comments clicked at random posted on the CRTC website.

Matthew Couto from Mississauga, Ontario, commented “The data only plans proposed by the incumbents are an absolute joke,” further telling the CRTC “Please don’t let them continue to gouge us!”

Vincent Piette from Toronto commented, “These data only rates plans are a joke. I was just [in] Europe and with Vodafone which had free roaming across all Europe I have purchased a sim card for 10 euros which gave me 3gb of full speed LTE data for 30 days. The incumbents are really disrespectful of Canadian customers.”

Victoria Grant from Toronto said “There are tablet plans that are $10 for 1GB so why would Canadian Telcos think that $30 for 500 MB would be sufficient. These proposals are a joke and a farce and I implore the CRTC have Bell, Rogers and TELUS go back to the drawing board.”

Telecom researcher and PhD candidate at Carleton University’s School of Journalism and Communication, Ben Klass, was frank in his comments to CBC News, saying “These companies have never been interested in serving people who just want the bare-access minimum,” adding “They’re really low balling it.”

Fido offers a tablet data-only plan for $15 with 3GB of data, but is an add-on plan and only for eligible postpaid mobile customers (correction: clarified to note the $15/3GB is for add-on only for mobile postpaid customers, as noted by Rogers in an email).

Rogers commented on the CBC story to say “We are proposing data-only plans at an economical price so our customers can stay connected.”

Telus told the CBC, its prepaid brand Public Mobile already offers inexpensive data-only plans, while a spokesperson said it offers “a wide variety of flexibility and choice for Canadians.”

The ‘Big 3’ argue the CRTC need not intervene when it comes to lower-cost, data-only wireless plans, because competition will mandate prices and ensure they stay in check.

But critics such as Klass disagree, noting Canadians can only get fair deals if the CRTC steps in and pressures the ‘Big 3’ into offering better offers, such as the mandated $25 skinny TV packages.

“Companies are going to charge as much as they can,” added Klass, if there’s no public oversight.

How to File a Comment on Lower-Cost Data-Only Plans by Rogers, Telus and Bell

Want to submit your comments to the CRTC regarding these lower-cost data-only plans from the Big 3?

Click here to get started–then click on the ‘Submit’ button under “Call for comments – Lower cost data-only plans for mobile wireless services – Public record: 1011-NOC2018-0098”, as highlighted below. 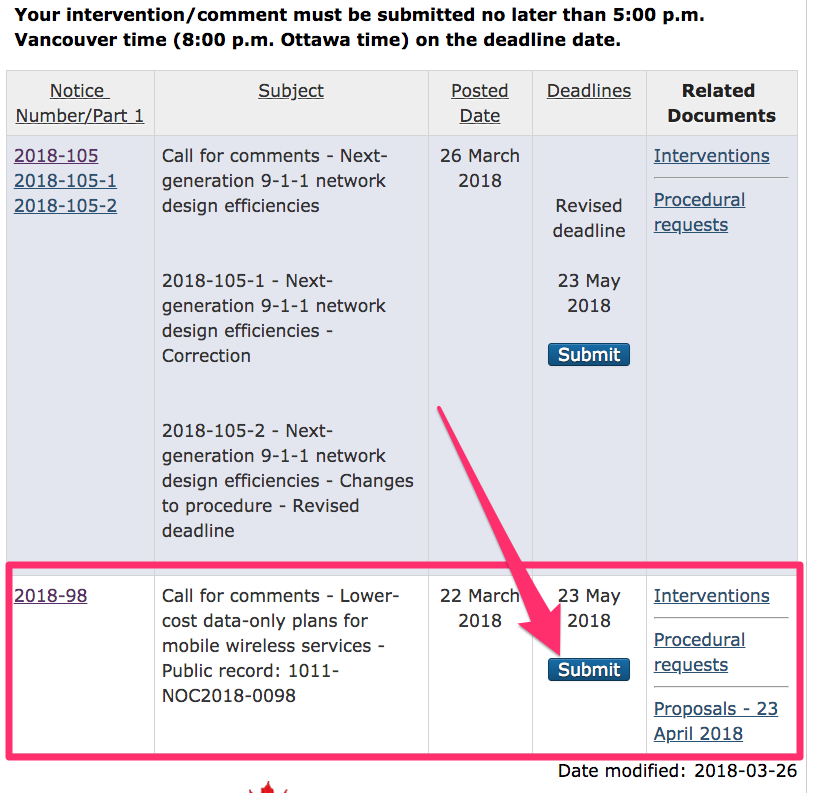 Your comment goes on public record and you can choose to add writing in the form of a comment, or in opposition or in favour of the ‘Big 3’ proposals. the last day to submit a comment is May 23, 2018.