The CRTC has announced the National Do Not Call List, an opt-in program to prevent telemarketing spam, has celebrated its fifth anniversary as of today:

“The National DNCL has been a success,” said Jean-Pierre Blais, Chairman of the CRTC. “Since its launch, millions of Canadians registered their numbers on the list to avoid receiving telemarketing calls and faxes. Telemarketers are getting the message that they must respect this choice or face the consequences, which can include hefty monetary penalties.”

The CRTC details how 11.9 million cellphone and landlines have been registered in the program along with 10,000 telemarketers. The DNCL has resulted in $3.4 million in penalties and $741,000 in other payments by violators. The latter has seen a compliance rate of 95% after being issued notices.

Below is an infographic which details milestones of the DNCL program: 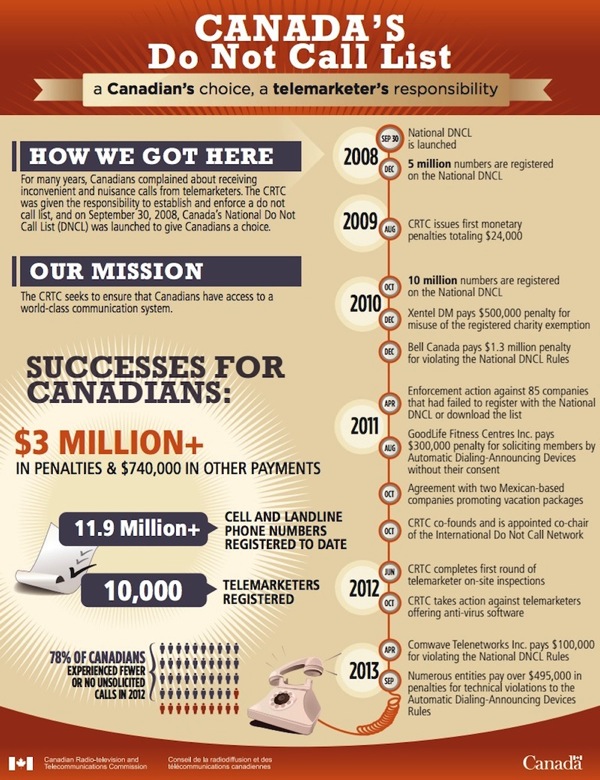 The CRTC reminds Canadians their original registered numbers on the DNCL were about to expire, thus have been automatically extended for another year to September 30, 2014. They are seeking input from the public to implement permanent registrations to avoid having to remove disconnected or reassigned numbers.

Not on the DNCL yet? Register or extend your number here.