The CRTC has released their report this morning on the future of programming in Canada, titled “Harnessing Change: The Future of Programming Distribution in Canada.” 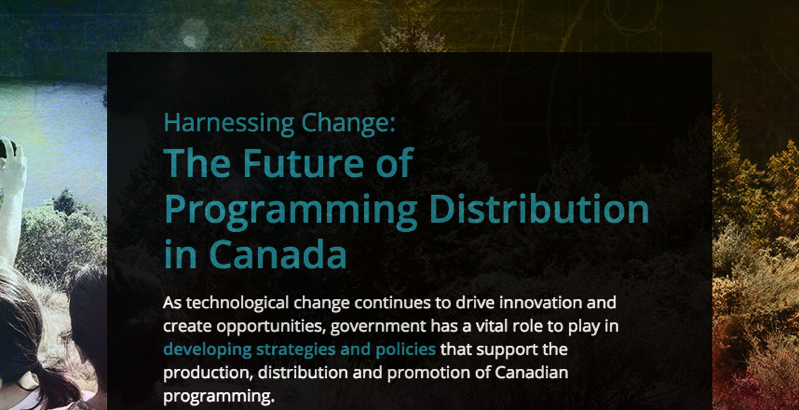 According to the CRTC, the current economic model for TV and radio model is being disrupted, which means funds to support Canadian productions are declining:

Traditional television and radio services are mature sectors, and some segments are in decline—not necessarily a steep decline, but an evident one. The economics of financing production means that a declining traditional system may be unable to support the production of important programming and promote and make it discoverable by Canadians.

So what does the report propose? It suggests new funding strategies, where internet service providers and foreign streaming services contribute to an integrated fund, alongside TV and radio stations.

The report says the current method Canadian-made content is funded “is unsustainable because it relies on traditional supports that are in decline (i.e., contributions by cable and satellite companies for video; contributions by radio stations for audio).”

So instead, “an integrated fund could also be supported through contributions by all broadcasting and broadband connectivity services (television service providers, radio stations, and wireless and Internet service providers), all of which benefit directly from the distribution of audio and video content.”

This means internet service providers contributing to the media fund, alongside foreign streaming services such as Netflix. Extra costs incurred by these companies would most likely be passed onto consumers, resulting in higher prices.

Funding would help contribute towards the following:

The report resulted in strong reaction on Twitter by industry watchers, noting a new regulated internet would mean a win for telecom lobbyists:

In today's "are you $@%* kidding me!?!?" news, the #CRTC calls on new ISP and wireless taxes to help fund Canadian TV production. Chant it with me: Hey ho, Chairman Ian Scott has got to go! https://t.co/yM3JKdk5iC

New #CRTC report in a nutshell:

The Internet is basically a vehicle for TV and radio.

Regulate the Internet! Save TV and radio!

The contrast between the Blais and Scott CRTC could not be more stark. Blais’ Let’s TalkTV premised on competition and global markets. Scott’s Harnessing Change is about regulation: ISP taxes, Netflix taxes, regulation of all video/audio as the “broadcast system” now the Internet

So many comments on the #CRTC Harnessing Change Report. But, for now, I will just say this FFS provide a PDF. Digital only is not inclusive or accessible. And it also requires that a reader is connected to the internet ??‍♀️ https://t.co/peLGuwEhC9

In a statement, CRTC chair Ian Scott said  “Canadians have access to a wide range of content on multiple online platforms, as well as through traditional radio and television services. While this evolution is a good thing, it has an impact on the traditional model that was designed to provide support for programming made by and for Canadians.”

Do you support regulation and funding by internet service providers and foreign streaming companies to help contribute to the creation of Canadian media? How much Canadian content do you actually watch?