Recycle My Cell, a free recycling program for your old cellphones, is calling on Canadians to recycle their old devices and accessories this upcoming Earth Day on April 22. The initiative is run by the Canadian Wireless Telecommunications Association (CWTA) and last year saw 582,000 devices recycled by the program.

The 2013 National Cell Phone Recycling Study released today revealed only 10% of respondents recycled their old devices when purchasing a new one, despite acquiring a new device every 30 months. As for the old devices? 42 percent of respondents said they went into storage, while 20 percent gave or sold old devices to an old friend or relative. 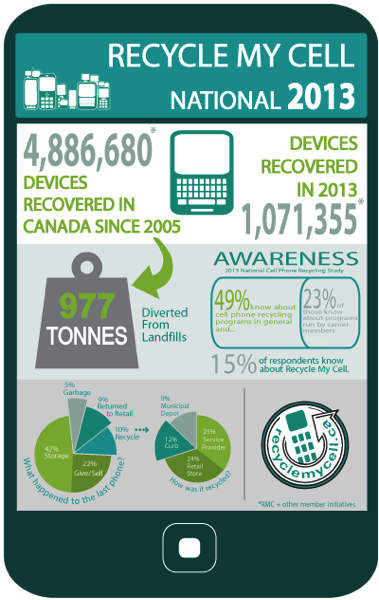 Bernard Lord, President & CEO of the CWTA said in a statement “It is also our responsibility to be world leaders in protecting our environment for generations to come. There is simply no reason that an old cell phone should ever end up in a landfill.”

Recycling an old cellphone is the obvious choice if you have an old worthless dumb phone around that isn’t worth your time to sell. But for those upgrading their smartphones every 1-3 years, those obviously would not be recycled as they are worth much more on the open market.

Drop off locations for recycling your old cellphone can be found at various locations nationwide—just enter your postal code here to find out one near you.