Many Canadians are waiting for last year’s popular $60/10GB BYOD holiday plan to turn this year, and so far it seems like Fido and Virgin are trying to lure customers with a similar plan this December.

According to users on RFD, the Fido kiosk at Richmond Centre in BC is currently advertising a $65/10GB BYOD (bring your own device) plan, for “today only”, as seen below: 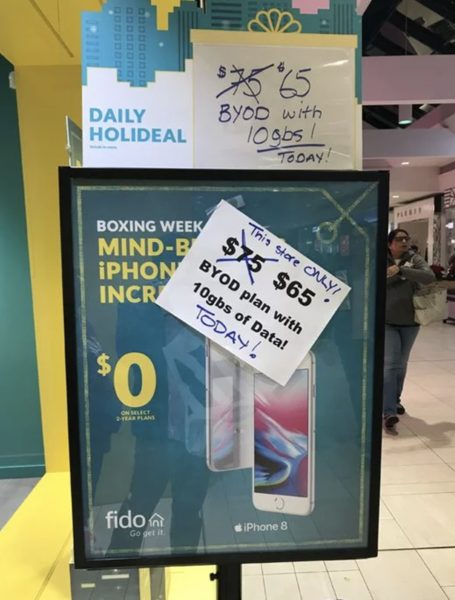 The handwritten poster says the plan normally costs $75 per month, but is available for $10 off at $65, today only. This Richmond Centre store currently closes at 9PM PT. We tried reaching out to this location over the phone, but there was no answer. This plan is only good for 12 months.

Another Fido store at International Village Mall in Vancouver advertised the same deal.

While advertised as one-day sales to convert mall traffic into leads, there’s a chance they could remain longer and into Boxing Day.

Currently, wireless carriers are offering some ‘deals’ for Boxing Day week. Rogers, Telus and Bell are offering double the data on select plans on two-year terms, while an iPhone XR is available for $0 upfront on contract from Rogers and Bell with a $115/10GB plan. Shaw’s Freedom Mobile has their own 4GB data bonus on select plans as well.

Update Dec. 23/18: Deal still available, also showing at Fido Store at Promenade Mall in Thornhill, Ontario. The $65 plan is only good for 12 months, as confirmed over the phone by a Fido employee. This article has been updated accordingly.