Boxing Day promos are here from Rogers, Telus and Bell, with the Big 3 simultaneously offering double the data on select wireless plans on two-year contracts. 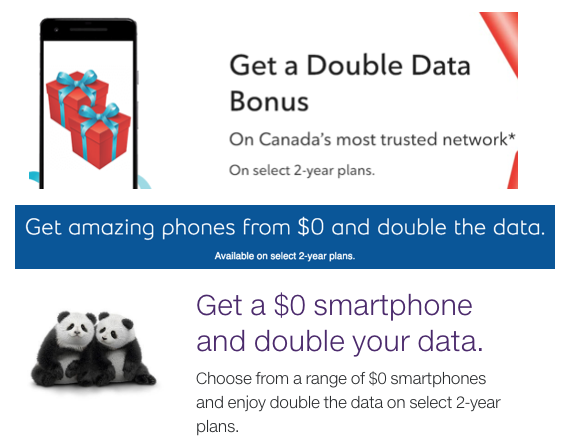 Essentially, most wireless plans are seeing either 4GB or 8GB of bonus data, resulting in the following data prices (voice options are extra) from the Big 3:

Bell also informs iPhone in Canada they have relaunched their $115/10GB Ultra Plan nationwide as of this morning (excluding SK/MB/QC), but we’re not seeing the configuration yet.

These data prices seem more expensive when compared to Freedom Mobile’s Boxing Day promo, which is offering 4GB bonus data on select plans $40 or higher, with hardware upgrades. You can get a $60/14GB plan with a 100GB Big Binge Data bonus, for example. But of course Freedom Mobile has limited coverage nationwide compared to the Big 3.

Will we see the return of the $60/10GB holiday plan from last year? The closest thing we’ve seen is a $60/15GB targeted Koodo offer for some customers, while Quebec currently has a $35/3GB BYOD plan from Big 3 flanker brands Fido, Koodo and Virgin.