A report titled ‘The Protection of Net Neutrality in Canada’ has been released by the House of Commons Standing Committee on Access to Information, Privacy and Ethics, which states its position on how the Federal government should proceed, if the Bell coalition’s FairPlay Canada website blocking initiative is approved. 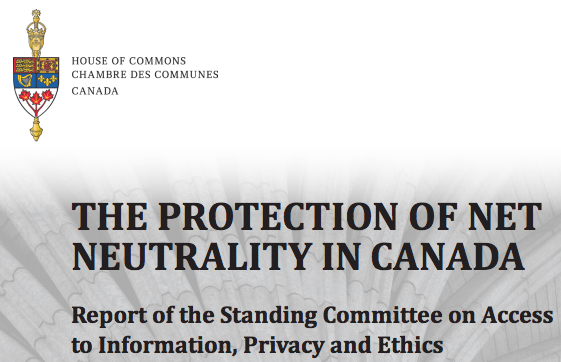 University of Ottawa Law Professor, Michael Geist, who was the first witness to appear in front of the committee for its net neutrality hearings, told the government how there needs to be stronger net neutrality enforcement in Canada, among other arguments.

One of the key conclusions of the study, details Dr. Geist, is the Committee’s conclusion for the government to reject FairPlay Canada, if it is approved by the CRTC, noting website blocking would erode net neutrality in Canada:

However, the Committee is of the view that the proposal could impede the application of net neutrality in Canada, and that in their testimony, the ISPs did not present sufficient explanation as to why the existing process is inadequate or sufficient justification to support to application. The Committee also remains skeptical about the absence of judicial oversight in the Fair Play proposal and is of the view that maintaining such oversight is critical. Therefore, the Committee is concerned that, in the event that the CRTC accepts FairPlay Canada’s application, net neutrality may be eroded in Canada by allowing Internet content blocking and censorship. These concepts are at odds with net neutrality, which ensures an open Internet.

As one of the report’s recommendations, it details if the CRTC approves FairPlay Canada, the federal government needs to use their authority within the Telecommunications Act to “ask the CRTC to reconsider its decision”:

That, in the event that the Canadian Radio-television and Telecommunications Commission supports FairPlay Canada’s application, the federal government consider using the authority provided under section 12 of the Telecommunications Act to ask the CRTC to reconsider its decision.

The Standing Committee adopted a motion to issue a report on net neutrality back in November 2017, and from December 6, 2017 to February 15, 2018, the group heard from eight witnesses on the matter.

For Canadians worried about website blocking from the Bell coalition, the recommendation by the House of Commons Standing Committee on Access to Information, Privacy and Ethics to reject FairPlay Canada is a clear sign the latter does not have political support.