Back in December, a draft proposal prepared by Bell and a coalition of other media companies was seen, which urged the CRTC to blacklist piracy websites. Many interpreted this as ending net neutrality in Canada, as the proposal would see Internet service providers comply with this non-profit organization created, known as the Internet Piracy Review Agency (IPRA). 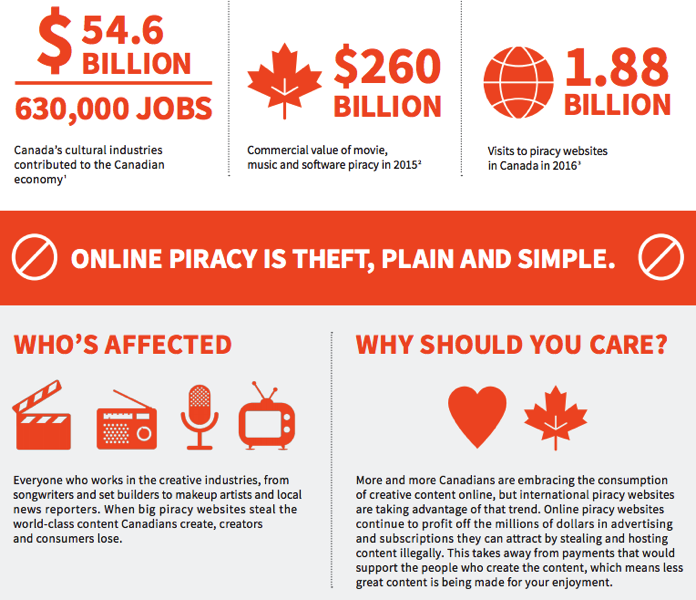 Today, we now know what Bell and other media companies have been planning, as the coalition known as FairPlay Canada has been announced. This coalition filed an application with the CRTC today includes the following companies:

FairPlay Canada argues 630,000 Canadian jobs are at stake because of piracy, and these cultural industries helped contribute nearly $55 billion to the Canadian economy. But when it comes to the commercial value of movie, music and software piracy, that total is $216 billion, according to 2015 data from the International Chamber of Commerce. In 2016, there were 1.88 billion visits to piracy sites in Canada.

Here’s how FairPlay Canada sees the non-profit IPRA will work:

2. IPRA reviews evidence from all parties,holds a hearing if required, and makes a recommendation to the CRTC.

3. CRTC considers the evidence and recommendation and, if it agrees, requires ISPs to disable access to the site.

FairPlay Canada says “consistent with the principles of net neutrality, ISPs never act unilaterally,” as the latter will be following decisions made by the CRTC.

According to the organization, “More and more Canadians are embracing the consumption of creative content online, but international piracy websites are taking advantage of that trend. Online piracy websites continue to profit off the millions of dollars in advertising and subscriptions they can attract by stealing and hosting content illegally. This takes away from payments that would support the people who create the content, which means less great content is being made for your enjoyment.”

Randy Lennox, President, Bell Media, said in a press release “Bell is pleased to work with our partners across the industry and the CRTC on this important step in ensuring the long-term viability of the Canadian creative sector.”

“We’re all for new ways of watching content, but piracy means that the content creators don’t get paid for their work. We believe this proposal represents a balanced and proven approach that goes after the people who illegally rebroadcast content,” said Rick Brace, President, Rogers Media

Check out the FairPlay Canada video below, which emphasizes website-blocking solutions:

What do you think about the proposal by FairPlay Canada to block piracy websites in Canada? With the popularity of VPN services, can piracy actually be stopped?