This morning Industry Canada approved the sale of Mobilicity to Rogers, while also giving the green light to numerous spectrum transfers among the companies that include Shaw and WIND Mobile.

Industry Minister James Moore said in a statement the spectrum license transfers between these four companies “will result in at least four wireless firms in every region of the country being able to offer the latest technology, world-class service and more choice to all Canadians and their families.”

Moore reiterated how in 2006, 98 percent of spectrum was held by incumbents, but now new wireless companies hold 25 percent of total wireless spectrum, which are set to increase competition more than ever before. The minister stated “The approval of these spectrum licence transfers is a win for Canadian consumers,” especially the unused spectrum Shaw had acquired back in 2008 which will now be put to use.

With the transfer of spectrum to WIND, the company will be able to deploy its LTE network in its key areas of BC, Alberta, Saskatchewan and southern Ontario and also “at least double network capacity,” WIND Mobile CEO Alek Krstajic stated earlier today.

Reporter Christine Dobby posted an easier to digest colour-coded graph on Twitter of before and after changes of these transfers—check it out below: 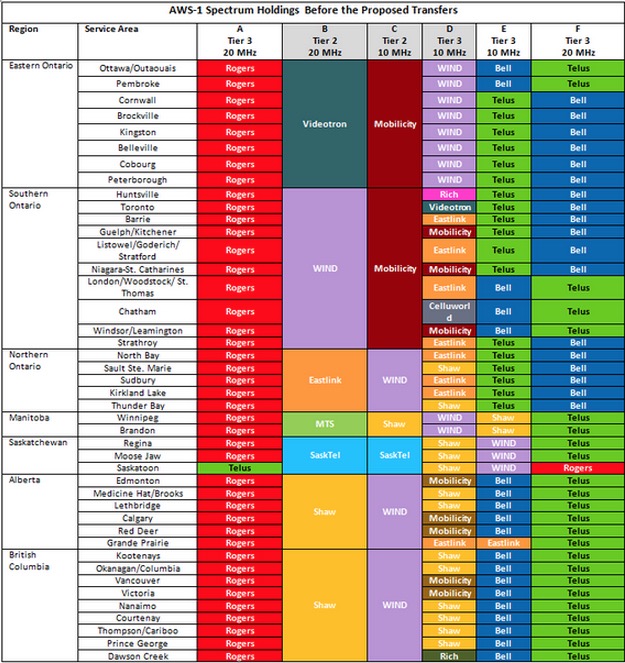 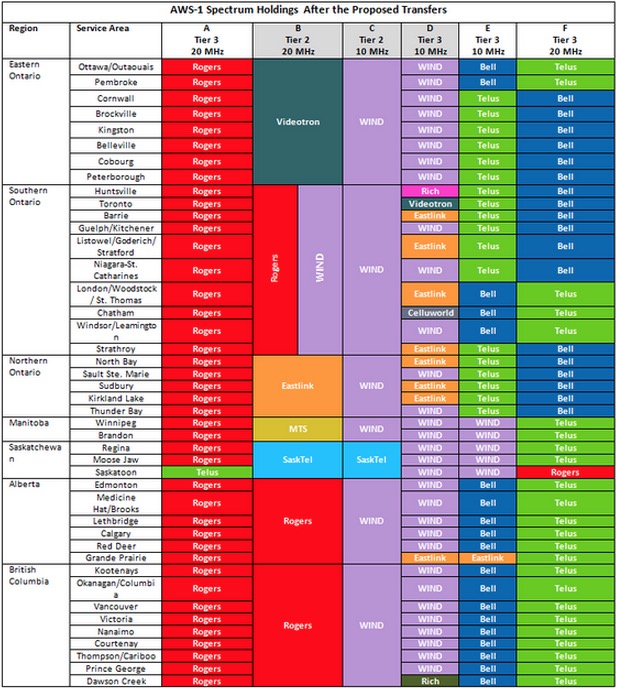 Fastest spectrum transfer approval ever? This is lightning speed! http://t.co/GWXL9wJoU2

These spectrum transfers benefit Rogers as they get new airwaves next to each other, while WIND Mobile receives 20MHz of spectrum in its major markets. In total, WIND gets 26 total licences (16 from Shaw; 10 from Mobilicity). Shaw acquired spectrum in 2008 but remained unused, only to sell it to Rogers for $100 million, in a deal that finally has been approved.

While these transfers seem beneficial to these companies, critics blasted the move. OpenMedia.ca said the federal government broke its promise to transfer spectrum that would decrease wireless competition.

NDP consumer protection critic Andrew Cash (via The Globe and Mail) was also in opposition of these deals, saying:

“After blocking two attempts by one of the Big Three to buy Mobilicity citing concerns about competition, the Conservatives have now signed off on greater concentration and less choice for consumers. The Minister needs to come clean on what deal he made to approve this takeover and how it will impact consumers who already pay some of the highest cellphone prices in the world,”

Industry Canada approved these spectrum transfers so fast—never before have we seen government workers get to work so quickly (#slowjab). Maybe the instant approval will allow WIND to setup its LTE network in time for the fall federal election, so the government can say it truly helped increase wireless competition? This is good news for WIND Mobile customers as they can rest assured an improved network is coming.