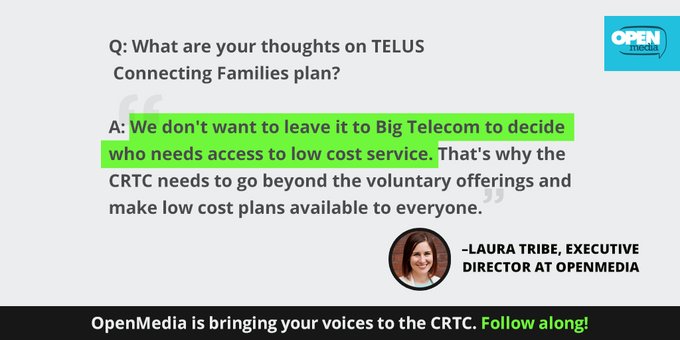 The Canadian Radio-television and Telecommunications Commission (CRTC) public hearing on wireless services continues, and today Vancouver-based non-profit, OpenMedia, is testifying in front of the Commission.

OpenMedia says in order to combat high mobile prices in Canada, they have a three-part plan to address it, specifically: “mandate full MVNOs, mandate low cost plans for all Cdns on national brands, and adopt wholesale spectrum access with fair and reasonable rates.”

A recent survey by OpenMedia saw 85% of respondents say high prices are a barrier to wireless use. This is because of lack of competition, explains OpenMedia, and to solve this, “full MVNO access” should be made available to bring on new entrants.

“Do not give into the threats from the Big Three who say they will slash jobs and investment if the CRTC acts. We need bold policy reform now,” explained OpenMedia.

In terms of low cost plans, OpenMedia proposed a $20/4GB plan, which they believe would be the “projected average usage” and made available to all.

When pushed back about the Telus Connecting Families plan, OpenMedia responded, “We don’t want to leave it to Big Telecom to decide who needs access to low cost service. That’s why the CRTC needs to go beyond the voluntary offerings and make low cost plans available to everyone.”

OpenMedia was asked about the threats from the Big 3 about reducing investment if MVNOs were mandated. The non-profit said “when wholesale wireline access was mandated, they made the same threats, but the reduced investment never came to fruition. The benefits include reduced cost from network sharing.”

For 5G, if incumbents want to delay or slow 5G investment, others would step up to build a network, such as regional and other players.

Bell previously told the CRTC now is not the time for MVNOs, Telus threatened to cut investment and jobs, while Rogers similarly said there is no need for MVNOs right now.

Update: Telus says the Connecting Families plan is decided by the federal government and not telecoms. According to the Government of Canada, “The Connecting Families initiative has been designed to connect hundreds of thousands of low-income Canadian families to the Internet. Participating Internet Service Providers are voluntarily contributing to the initiative by offering $10 Internet service (plus tax) to eligible families who currently receive the maximum Canada Child Benefit.”

SaskTel announced on Wednesday it will waive long distance and text messaging fees from Canada to Turkey and Syria, to allow customers to stay in contact with friends and family affected by the recent devastating earthquake. “Our hearts go out to everyone who has been impacted by the deadly earthquake that struck Syria and Turkey […]
Gary Ng
11 hours ago

Here are the latest Canadian cellphone plan and device deals, plus other promos from wireless carriers such as Rogers, Telus and Bell, from our partner PlanHub. As always, the promos and plans may change at the last minute, but here they are as of Wednesday, February 8, 2023. Check them out below… Bell Noticeable price changes: Samsung […]
iPhoneinCanada.ca
14 hours ago

Vancouver, B.C., resident Erica Phillips last week was finally able to rid herself of the daily calls from collections agencies hounding her to pay hundreds of dollars owed on a Bell Mobility account that had been fraudulently created in her name by someone who stole her identity — reports the CBC. "It's a huge sense of...
Nehal Malik
17 hours ago