The Federal government has upped the ante in the wireless war against Rogers, Telus and Bell as late last week it began a new ad blitz to target wireless incumbents in national, metro daily newspapers and on radio, reports the Globe and Mail, a stark contrast when the Big 3 targeted Ottawa relentlessly over its wireless policies.

The timing of the ad campaign is an interesting one since incumbents are limited to what they can publicly say on the topic due to gag orders implemented by the 700MHz wireless spectrum auction. The print ads echo the messages seen on Industry Canada’s ‘More Choice’ website, launched at the end of August:

“Our largest wireless companies hold 85 per cent of the airwaves,” the government’s print ads note, declaring that, “The fact is Canadians pay some of the highest wireless rates in the developed world.”

Radio ads spread the message incumbents represent their interests, while Ottawa is here to defend the Canadian public:

“While Canada’s wireless companies represent their interests, the government of Canada is here to represent the interests of all Canadians,” the radio spot says.

Rogers, Telus and Bell (the latter owns 15% of the Globe) declined to comment in detail on the story but, Ken Engelhart, senior vice-president, regulatory, at Rogers, did comment on the taxpayer-funded ad campaigns:

“We were surprised to see that the government has launched this campaign. We’re not sure how this benefits Canadians or how it helps the government achieve its goal of a more competitive wireless sector.”

Ottawa said the ad blitz will continue through the fall and did not reveal the budget, according to Jessica Fletcher, director of communications for Industry Minister James Moore:

“The government of Canada has an obligation to inform Canadians about important policies, programs, and services it offers. The objective of the campaign is to provide Canadians with the facts about Canada’s wireless policy,”

The ‘More Choice’ website has been updated to provide a FAQ on the 700MHz auction and also key dates involved. 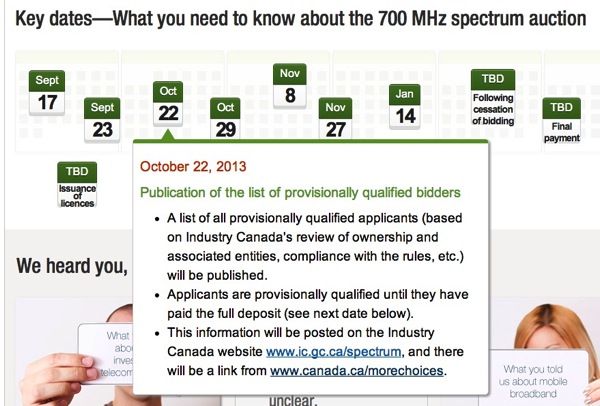 Earlier this week Industry Canada revealed the list of upcoming bidders, which revealed 15 Canadian companies and zero foreign participants. What do you think of the Conservative government’s ad campaign firing back at the Big 3?