Governor General David Johnston delivered the speech, which opens the second session of the 41st Parliament and outlines Ottawa’s agenda. 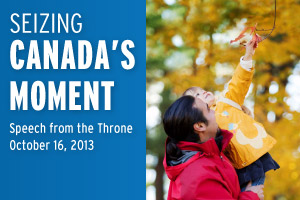 The speech noted the Federal government will “take steps to reduce roaming costs on networks within Canada,” as Canadians pay some of the most expensive wireless rates globally. Unfortunately, the speech unfairly targeted teenagers as one of the culprits behind high monthly wireless bills, but goes on to say competition is coming:

For example, although Canadians are among the most digitally connected in the world, we also pay some of the highest wireless rates in the developed world. As families know—especially families with teenagers—the monthly bills add up.

Our Government has already taken action to achieve greater competition. Canadians know that competition is good for everyone. Competition lowers prices and keeps businesses from becoming complacent. As a result, wireless rates have fallen nearly 20 per cent since 2008.

Earlier this afternoon we reported how Ottawa’s ConsumersFirst.ca website was recently updated to reflect talking points from the Throne Speech. You can read the entire speech here.

Do you think the Federal government will be able to defend Canadian consumers with their new policies when it comes to wireless competition?