Rogers, Telus and Bell Appear in Definition of ‘Oligopoly’ on Financial Website

Canadians have long known their wireless market is dominated by three companies: Rogers, Telus and Bell. This trio is known as the ‘Big 3’, as they control nearly 90 per cent of the wireless market in Canada.

Now, according to a post by a user on Reddit, it was discovered the financial website Investopedia, has given the example of Rogers, Telus and Bell in its definition of ‘oligopoly’. The Reddit post has been voted up over 1300 times, making it one of the rising submissions on the social media site.

Here is the text of how Investopedia notes the ‘Big 3’ in its “Breaking Down ‘Oligopoly” section:

An example of an oligopoly is the wireless service industry in Canada, in which three companies – Rogers Communications Inc (RCI), BCE Inc (BCE) subsidiary Bell and Telus Corp (TU) – control approximately 90% of the market. Canadians are conscious of this oligopolistic market structure and often lump the three together as “Robelus,” as though they were indistinguishable. In fact, they are often indistinguishable in price: in early 2014 all three companies raised the price for smartphone plans to $80 in most markets, more or less in tandem. 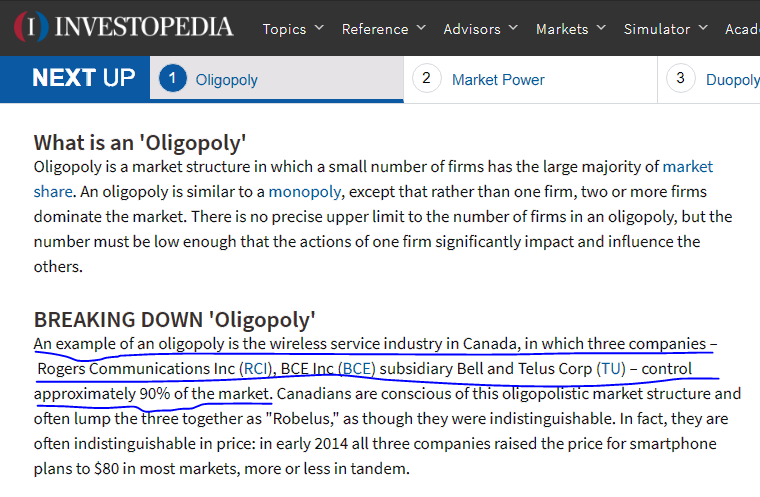 Another Reddit user posted a screenshot showing the disparity in wireless pricing across Canada, showing how 10GB of data costs 50% less in Saskatchewan and Manitoba, due to regional completion in the latter provinces. The Reddit user titled his caption “WTF Bell, Telus and Rogers.” 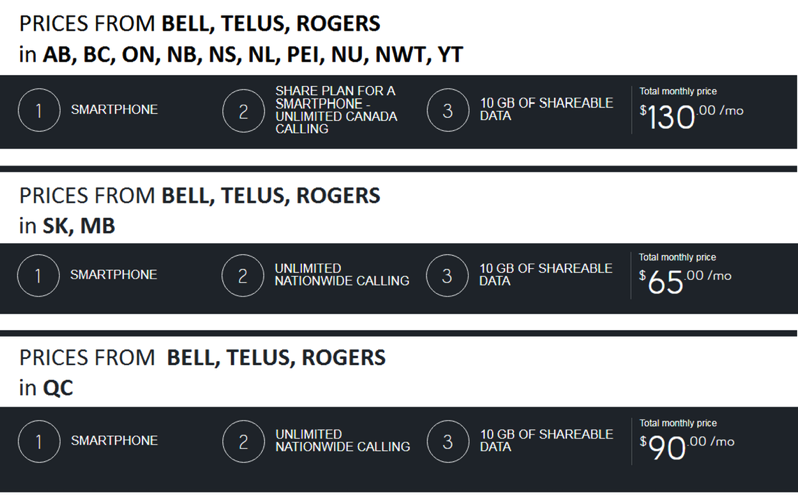 For customers in Quebec, they’re paying 31% less compared to other provinces due to regional competition from Videotron.

Despite market domination by the ‘Big 3’, we could see the emergence of a fourth player, as Shaw’s Freedom Mobile aims to take on incumbents by gaining 25% marketshare in the cities they operate, following a model like Quebecor’s Videotron.

When Freedom Mobile starts selling the iPhone, that is when momentum should swing their way, according to analysts. Apple’s latest iPhone 8, iPhone 8 Plus and upcoming iPhone X have updated modems which supports Freedom Mobile’s LTE Band 66, so more competition is on the horizon.

What do you think? Do Rogers, Telus and Bell define an oligopoly?

Rogers and Shaw today announced an extension of their proposed $26 billion merger, along with the sale of Shaw-owned Freedom Mobile to Quebecor’s Vidéotron in a side deal that's part of the broader transaction, to February 17, 2023. "All parties remain committed to the pro-competitive transactions, which will deliver significant benefits to Canada and Canadian...
Nehal Malik
9 hours ago