Montreal’s métro system will soon be wired, announced the Société de transport de Montréal (STM), as Rogers, Telus, Bell and Vidéotron have teamed up to provide 4G LTE mobile network coverage for underground stations, cars and tunnels over the next 5-7 years, at an estimated cost of $50 million.

The STM says Montreal will be one of few cities on the globe to have an underground 4G LTE network in its métro. Place des Arts and St Laurent are the first two stations to get Wi-Fi by the end of 2013.

Chairman of the Board of Directors of the STM, Mr. Michel Labrecque, issued the following statement (Google Translate):

“In an environment of goodwill and continuous improvement of customer service growth, we warmly welcome the arrival in Montreal subway Bell, Rogers, TELUS and Videotron. By uniting and mobilizing around this promising project, we finally allow the use of wireless devices in our approximately 900,000 daily customers traveling in the metro. Through this initiative, we meet one of the objectives of the 2020 Strategic Plan, which is to provide an enhanced customer experience by making it more friendly and pleasant, and while continuing the development of customer information in real time. In doing so, we intend to stay abreast of new technological trends to continue to provide the best service possible,” 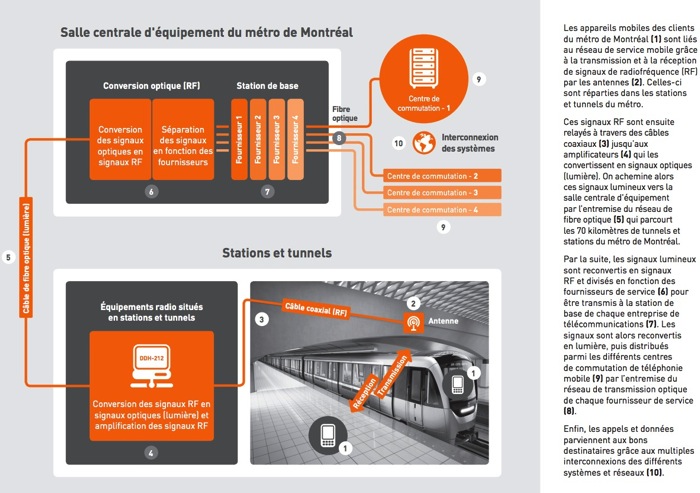 Chicago’s Extenet had originally planned to manage the STM’s underground mobile network, but the the former could not bring incumbents and Videotron on board after two years of negotiations, failing to make any headway and ultimately giving up in 2012. It was only then the Big 3 and Videotron suddenly teamed up and formed their own group to seal a deal with the STM.

Back in August, BAI Canada, which won a licence with the TTC to integrate an underground mobile network, complained it could not get incumbents on board to build a wireless network within subway stations.