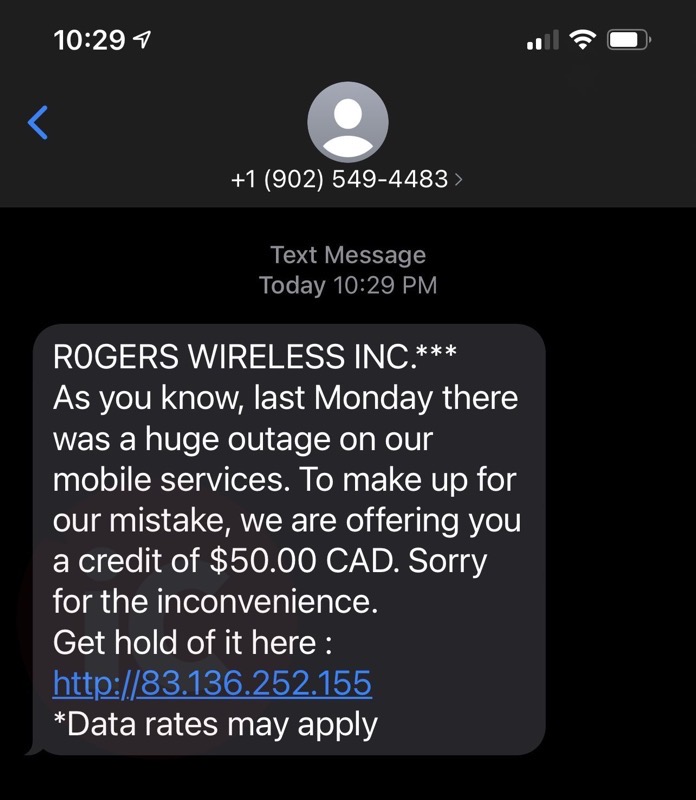 One week ago, Rogers suffered a 16-hour wireless outage across its network, blamed on a software update by partner Ericsson.

The day-long outage interrupted work and school for wireless customers on Rogers, Fido, Chatr and more. Rogers offered a one-day wireless bill credit for customers for the inconvenience. But now it appears scammers are taking full advantage of the wireless outage that affected nearly 10 million Rogers customers.

A recent text message received by iPhone in Canada reader Sean noted, “as you know, last Monday there was a huge outage on our mobile services. To make up for our mistake, we are offering you a credit of $50.00 CAD. Sorry for the inconvenience.”

The fake text then says, “get hold of it here” and links to a phishing site aimed at stealing your personal information. The text even ends with the classic line, “data rates may apply”.

While the message may not trick savvy users, at first glance it does sound convincing. Rogers is spelled with a “0” instead of the letter “O”, which may have allowed it to bypass spam and phishing filters.

It’s all about the numbers for scammers so they just need a tiny percentage of people to fall for the trick and have their information stolen.

Rogers did indicate this was a phishing attempt and said any other fake texts received should be forwarded to 7726 (SPAM) for the company to investigate it and block the text from the network.

Rogers’ proposed $26 billion takeover of Shaw Communications, if successful, could deliver a $216 million payday to 12 hedge funds that bet on it — reports Reuters. The controversial and heavily contested merger has a January 31 deadline. With the Federal Court of Appeal rejecting the Competition Bureau’s appeal of the merger on Tuesday, Rogers and...
Nehal Malik
19 hours ago