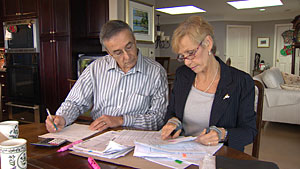 According to a report from the CBC, some White Rock residents have been suffering from what Rogers calls “accidental roaming” charges.

Jane Goundrey lives near the BC-Washington border and while inside their home, she claims her cell service roams “75-80 per cent of the time” on a more powerful AT&T signal coming from the USA, instead of her wireless carrier, Rogers. Goundrey and her husband had accumulated over $400 in roaming charges:

Goundrey said that on her street the Rogers signal can’t compete with the powerful signal from AT&T in Washington. As a result, her family’s phones automatically switch to the U.S. network.

“The only way a Rogers customer gets coverage here is to roam into the States. Why don’t they just admit that up front?” Goundrey asked.

Rogers responded to the story and stated that “accidental roaming” is a problem for those living near the Canada-USA border:

“Network signal overlaps can happen near the U.S. border. It’s an industry-wide challenge and unfortunately it can affect our customers too,”

“In terms of White Rock, we do have a number of cell sites … and we are looking at other sites to improve our service in that area to cut down on accidental roaming.”

As for Goundrey, her biggest complaint was the countless hours inspecting her phone bill and spent repeating her story to Rogers support on the phone to reverse the charges. She says at least 21 calls starting from scratch each time were made to Rogers over three years and “the way they do the billing is so complicated that you would need to put your life aside and just look at your bills to deal with it.”

Rogers eventually credited the family $400 for the charges and noted they automatically re-rate voice calls and adjust invoices for texts and data to help customers that roam to AT&T.

When Goundrey’s three year contract with Rogers recently expired, her family signed up with Bell, which she finds to be a major improvement as now calls can be made from within her home.

Industry analyst Carmi Levy says when users accidentally roam and charges add up on bills, it’s additional revenue for wireless carriers when customers don’t notice or call it in. Roaming to US networks remains a problem for all residents along the U.S. border.

If you live near the U.S. border, does your cell service automatically switch to roaming instead of staying local?