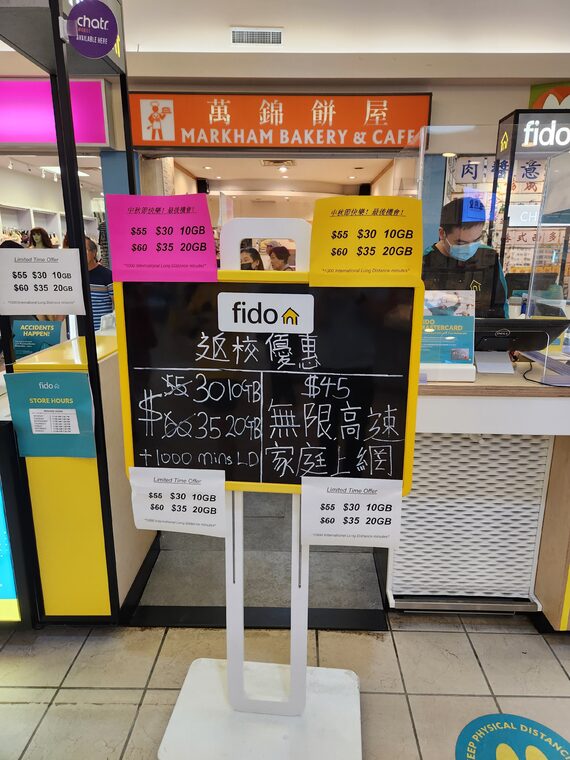 Cellphone plan deal hunters, get ready for the next round of promos hitting select retail stores. This time around, it’s Rogers flanker brand Fido, which is offering up a $30/10GB and $35/20GB plan at select retail locations.

According to RFD, the Fido stores at First Markham Place, Parkway Mall and Pacific Mall in the Greater Toronto Area in Ontario are offering these promo plans. The Fido store at Woodside Square Mall in Scarborough also has this offer, which is available for 12 months.

These bring your own device plans are normally priced at $55 and $60 respectively, so you’re saving $25 per month. They are available for new activations and also include 1,000 long distance minutes.

We previously reported select Telus and Koodo stores in Ontario are also offering promo $30/10GB and $35/20GB plans as well, for 12 months. It’s likely Bell’s Virgin Plus will also be offering these promo plans, as it seems 10GB and 20GB for $30 and $35 per month are the new battleground plans heading into the fall.

Again, it’s unclear how long these promo plans will be available, but your best bet is to call your local Fido store and ask if these promo plans are available. While the discount pricing is only available for 12 months, you could just hop onto the next best plan in one year’s time.

With Black Friday coming in November, we may see similar or better cellphone plan deals pop up. But for now, if you can nab one of these plans, it’s some of the cheapest prices we’ve seen lately for 10GB and 20GB of data.