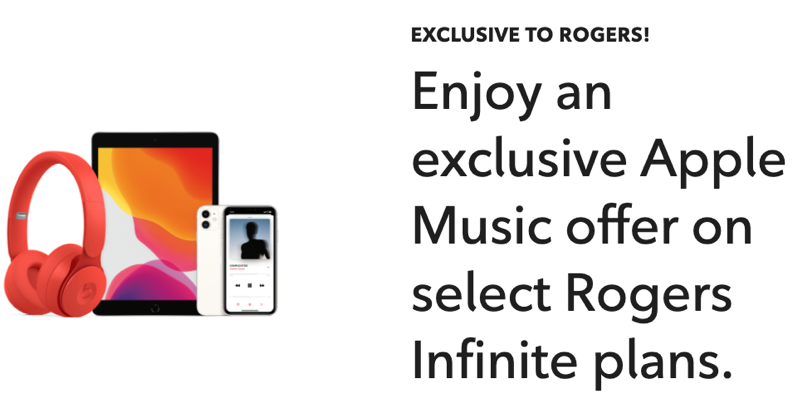 Last week we told you Rogers was planning to offer free Apple Music for six months with select Infinite plans, and today the company made the promo official.

For Rogers subscribers on a 20GB or 50GB Infinite plan, they can get six months of free Apple Music. Customers will need to sign up for Apple Music through Rogers and have billing paid through the wireless company.

“We’re always looking for ways to deliver more value to our customers and this exclusive Apple Music offer for Rogers Infinite customers is another example of that,” said Brent Johnston, President, Wireless, Rogers Communications, in an issued statement.

“Rogers Infinite plans allow our customers to take full advantage of their wireless services, and with this six-month offer on select Infinite plans, they can enjoy over 60 million songs, curated playlists and more with infinite data and no overages,” added Johnston.

New and existing Apple Music subscribers can get the six months free offer from Rogers, with the subscription activated through the MyRogers app. After the six months is over, you’ll be billed $9.99 per month to Rogers account.

Rogers says over two million Canadians are already subscribed to Infinite plans which offer ‘unlimited’ data for your initial data bucket, then throttled data to 512 Kbps, with no data overages.

Apple partnered with Verizon in the United States last January to offer a similar six months free Apple Music promo. This marks the first time a similar offer has landed in Canada.

This is a decent perk if you’ve never signed up for Apple Music before and you’re choosing an Infinite plan. But the best way to subscribe to Apple Music on a discount is to pay the annual fee from Apple, coupled with discounted iTunes cards from Costco.