Looks like Rogers has started to increase redemption limits on some rewards, as the requirement to redeem 2GB of data has increased to 1500 points ($15 value); previously, this was available for 1000 ($10 value) points. 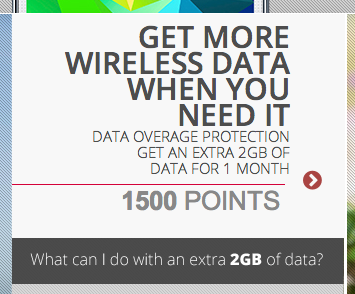 The 50% point requirement increase occurred despite the data amount staying the same, according to iPhoneinCanada.ca reader Nicholas, who spotted the change.

The program is based on tiers and the average amount spent on a customer account including cable, wireless, internet and home services:

The Rogers First Rewards program was made available to all customers back in November of 2013.

Update July 10: We reached out to Rogers for comment on the changes and they responded with the following via email:

We’re always reviewing our rewards catalogue to ensure that we’re meeting our customers’ needs and to ensure our redemption requirements are consistent with in-market prices. We recently increased redemption requirements on some of our rewards, and we’ve also decreased the number of points needed to redeem some of our most popular rewards, including TMN movie packs and wireless roaming packs.

Torontonians and experts are once again calling for Rogers, Bell, and Telus to provide underground cellular service on the Toronto Transit Commission (TTC) subway amid an uptick in violent incidents, including stabbings, armed robberies, and assaults, on the line in recent months — reports CityNews Toronto. In 2012, BAI Communications won a 20-year, $25 million...
Nehal Malik
14 hours ago