Rogers Infinite plans offer no overages on data, as customers get ‘unlimited’ use beyond their initial data buckets, but throttled at 512 Kbps.

These Infinite plans start at $75 for 10GB of data on the Rogers website, but it appears there’s a $60 option with 8GB of data, available through the company’s retentions department, according to RFD. The retentions department usually offers rare deals for customers thinking of cancelling and switching to another carrier.

RFD user ‘KGraps’ explains, “I called into Rogers yesterday and was offered an infinite plan of 5GB with an extra 3GB. The image is not showing the 3GB specifically but I called in to confirm this was the case.”

Below is a screenshot showing the plan named, “Non-Share Infinite +5 No Tab”, which is available for bring your own device (BYOD). Again, the extra 3GB data to make it an 8GB plan is not showing, but is included: 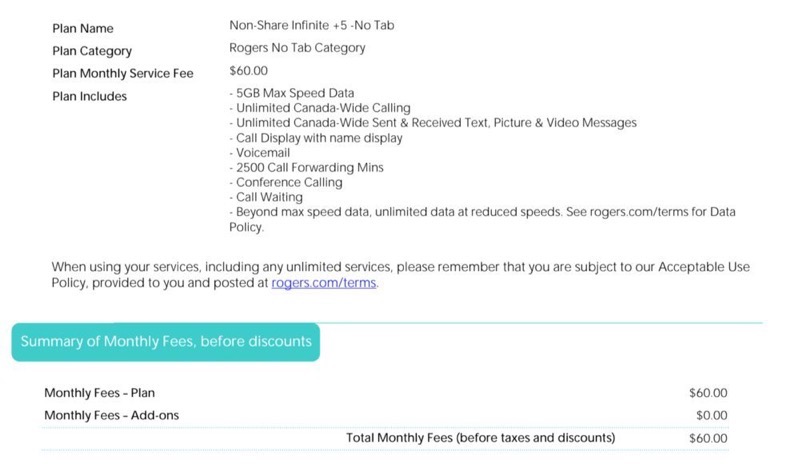 Other RFD users said Rogers did indeed offer this plan when they called in themselves. The plan includes unlimited Canada-wide minutes and unlimited global SMS/MMS, plus usual extras like voicemail, caller ID, etc.

Why would you want to get a $60/8GB Infinite plan? Despite throttled data, there won’t be data overages so your bills should remain at $60 per month.

Let us know if you’re going to call into Rogers and ask for this plan.