Rogers has announced a new data manger feature called Stream Saver, which will limit video streaming quality so users can save data. The feature launches today for desktop users and will hit the MyRogers iOS app “in the coming days.” 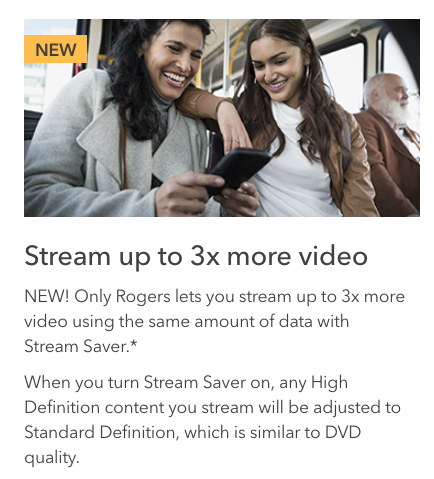 Once enabled, Stream Saver will limit streaming from high definition to standard definition (“similar to DVD quality” says Rogers). The company says it will allow a customers to watch 18 minutes of standard quality video on YouTube, versus 6 minutes for HD—using the same amount of data.

Stream Saver allows you to watch up to 3 times more video with the same amount of data that is in your current plan. By streaming content that it recognizes as video in standard instead of high definition quality (where available), you’ll get to enjoy more of what you love on your smartphone or tablet. You can turn it on or off at any time and you can choose which lines on your account use Stream Saver. Make sure you update your MyRogers app so you always have the latest features.

“We want our customers to get the most out their plan and providing solutions that allow them to manage their family’s data is a big priority,” said Raj Doshi, Executive Vice President, Wireless, Rogers Communications in a press release. “This new feature means families can stream, share on social media, and connect with what matters, worry-free.

Let us know if you plan to use Stream Saver with your Rogers Share Everything plan.

MPs on the House of Commons' industry and technology committee on Wednesday expressed concerns about the impact of Rogers’ proposed $26 billion takeover of Shaw Communications on jobs, competition, and affordability in Canada's telecommunications sector (via The Globe and Mail). During another hearing on the long-embattled merger just a week before its January 31 deadline,...
Nehal Malik
18 hours ago