Yesterday and today Rogers tested out some ‘Sponsored Tweets’ on twitter, to promote their new service Rogers One Number, which we’ve reviewed previously. The new service is actually pretty cool, but when it came to this twitter ad campaign, customers turned the other way.

When the @RogersBuzz sent out the tweet, customers started using the hashtag #Rogers1Number to complain about Rogers, rather than talk about the new service. The Globe and Mail covers the fallout, and also notes the Rogers Social Media team has now turned to responding to customers individually.

A quick search for #Rogers1Number shows the following tweets: 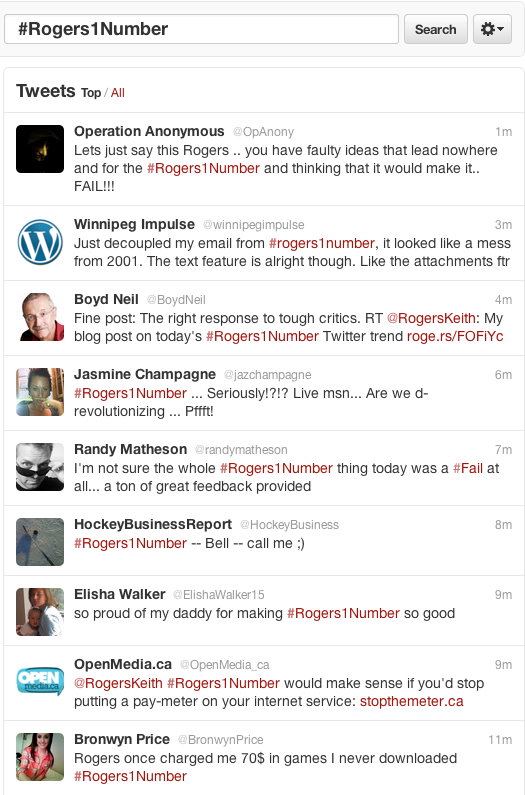 Rogers has officially responded on their Rogers Redboard:

It was about three years ago that we first started talking to customers on Twitter with our @RogersBuzz and@RogersHelps accounts. We knew the conversation wouldn’t always be positive. Today we were reminded that it can sometimes be very negative.

Last night, we launched a campaign to promote our Rogers One Number service on Twitter. It seemed like a natural. Our analysis of social media conversations showed this was the most positive thing Rogers has ever done since we started tracking online conversations in 2009. Customers told us they loved this free service that allows them to extend their wireless number to their computer.

But as you’ll read today in the Toronto Star and elsewhere, our campaign to promote the #Rogers1Number hashtag is being used as an opportunity for customers to highlight any number of concerns or complaints about Rogers.

But you know what? We’re okay with that. We’re in social media to listen, not just to talk. So we’re reading all the comments and helping as many customers as possible. We’ve been listening to customer feedback in social media for years and have made many changes to our products and services as a result.

A big part of why we launched RedBoard is to hear your feedback. So if you’ve found RedBoard for the first time today through the#Rogers1Number hashtag, please take a moment to fill in our survey. This will help us in our efforts to constantly improve our services and the customer experience.

Now this is what you call the power of social media. What you think of the turn of events with this latest social media campaign by Rogers?