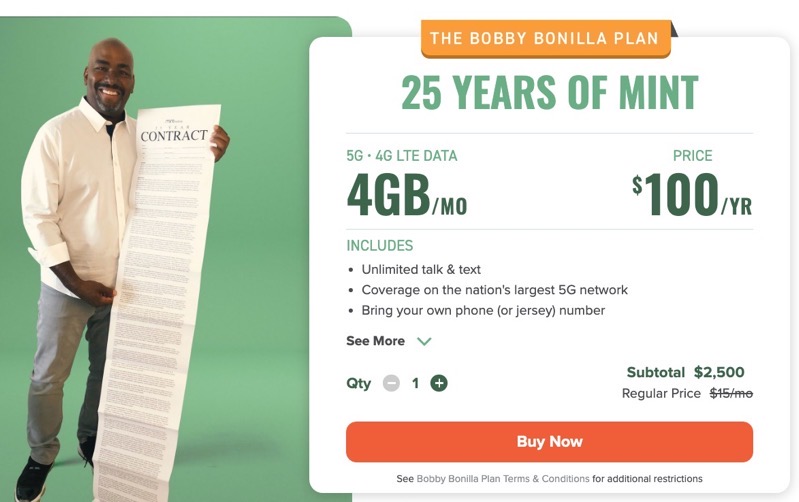 While the U.S. allows for mobile virtual network operators (MVNO) such as Mint Mobile, which resells wireless purchased from major telcos (in Mint Mobile’s case, T-Mobile), we don’t have widespread MNVOs in Canada.

Despite the CRTC ruling in April it had a new MVNO strategy, which will only allow established regional carriers to access spectrum from incumbents, we don’t have disruptive carriers such as Mint Mobile in Canada.

Reynolds responded to the CRTC ruling in April to say Mint Mobile would instead “forge ahead with landlines” in Canada, likely making a joke about the impossible situation.

“Years ago, former pro baseball player Bobby Bonilla signed one of the most famous contracts in sports history, ensuring he would be paid more than $1 million every July 1st for 25 years,” explained Mint Mobile.

“So to celebrate Bobby’s big payday, we’ve partnered with him to offer the Bobby Bonilla Plan: 25 years of Mint Mobile premium wireless service for just $100 a year. That’s right, you can lock in Mint Mobile until it’s time to move to Mars,” added the company.

The mobile plan includes unlimited talk and text, plus 4GB per month of 5G data, available for $100 per year ($8.33 USD per month), which is dirt cheap when compared to equivalent cellphone plans in Canada. Normally, the plan is priced at $15 USD per month.

According to Reynolds in an update on Friday morning, 124 people actually signed up for the Bobby Bonilla plan.

“Welcome to the 124 new members of the Bobby Bonilla Wireless Plan. The finance guys are legitimately mad at me. We expected like 4 people,” said Reynolds.

Welcome to the 124 new members of the Bobby Bonilla Wireless Plan. The finance guys are legitimately mad at me. We expected like 4 people.